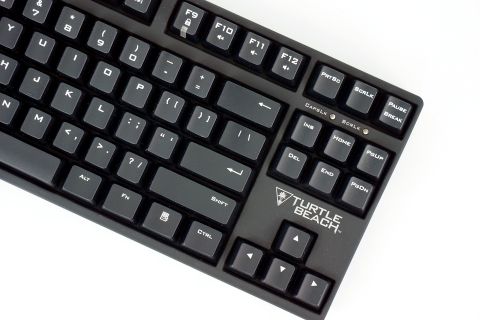 Taking the Impact 500 apart requires a bit of elbow grease, and to be abundantly clear, do not try this at home unless you want scuff marks from prying tools along the edge of the chassis. You could very well break something (on the keyboard, not on your person).

As you can see from the photos, I managed to scuff and scrape part of the backplate wrestling the top panel off. There were no screws holding it on, but a single plastic post held everything together. Seeing no other options, I eventually just snapped the post.

It wasn't until much later that I realized there was, actually, a screw inside that plastic post. It was on the bottom of the keyboard, hidden under a sticker that ominously read "Do not remove." I should have questioned the sticker and ripped it off, saving myself the bruised fingertips and slightly damaged keyboard. (There's a lesson in there somewhere, kids.)

Anyway, once I cracked the top panel off, removing the PCB required only a slight amount of leverage to jiggle it out from the plastic back of the chassis. Although the top panel and bottom chassis are plastic, the backplate upon which the switches rest is steel and provides rigidity to the Impact 500.

For the sake of keeping dust out of the inside of the chassis, Turtle Beach designed its backplate with few openings around the main keys. However, there's a huge opening near the arrow keys, and although it's covered by the top panel, it is a means by which dirt and dust can slide inside the chassis.

One other small issue I noticed is that some of the keys appear to be seated slightly higher than others. The difference is miniscule, but it's enough of an aberration that I spotted it.