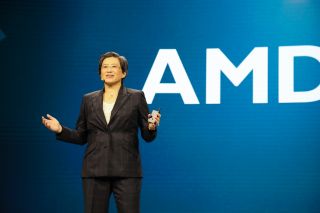 AMD has broken its previous closing stock price record during today's intra-day trading. The previous closing record was set at $47.50, which was set on June 21, 2000. Of course, factors like inflation do apply, but regardless, this is an important hallmark for the company, which is trading at $47.62 at the time of writing.

The new height reflects the market's growing confidence in AMD's portfolio of Zen 2-powered processors, which now challenge Intel in every single segment of the market they compete in, and confidence in the company's ability to deliver on its goals as it moves to future architectures, like Zen 3 and Zen 4.

Times have certainly changed for AMD compared to its last record stock price: In March 2000, AMD released the world's first 1GHz processor, the Athlon 1000, which competed directly with Intel's NetBurst architecture. Intel's competing processors weren't nearly as impressive in terms of pricing, power efficiency, or performance. AMD also had its first multiprocessor platform, the Athlon MP, in the works to challenge Intel in the data center.

AMD weathered several ups and downs in the following years, with a brief return to Wall Street's favor in 2006 when it peaked at ~$35, which came during the company's good years with its Opteron data center chips that granted the company ~25% of the data center market share in 2006 and 2007, the company's peak in that high-margin segment. Intel's new Core series turned the tide, which led to AMD's lackluster stock performance in the following years leading up to Bulldozer's ill-fated release in 2011, which sent the company on a long downward path that nearly ended in bankruptcy in 2016.

Then Zen happened. AMD's Lisa Su was appointed CEO in 2014 and announced the pending arrival of the first Zen-based processors in August 2016, and the company revealed the finer details of the architecture a mere seven days later. That architecture has evolved quickly over the intervening years, allowing the company to leverage TSMC's 7nm process, which gives the company a density and efficiency lead over Intel's 14nm node, to great effect.

Perhaps AMD's biggest potential lays in the high-margin data center, where the company is clawing back share, albeit slowly, from Intel with its new EPYC Rome processors. AMD is grappling with significant challenges satiating demand for its 7nm process, but company representatives have indicated that it has adjusted orders to increase output, which should help address supply issues moving into 2020.

Intel, meanwhile, has also suffered from ongoing shortages of its 14nm processors and is struggling to transition to its 10nm process, leaving AMD an almost-perfect opening to gain market share.

AMD has hovered around its previous peak for several days, but a re-iteration of a buy rating from Nomura today, citing "gains from new products and increased ASPs, revenue growth, and operating leverage," helped push AMD over the top.

AMD has led the S&P for two years and has strong momentum as it moves into 2020. We expect to learn more about the company's next steps at CES 2020, which begins next week.