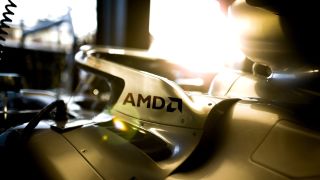 AMD has picked its horse for the upcoming 2020 Formula One Season. It announced Tuesday that it's sponsoring the Mercedes-AMG Petronas Formula One Team. Through this partnership it will offer the team, which represents Mercedes' high-end performance AMG line, with AMD hardware. AMD confirmed to Tom's Hardware that it's no longer sponsoring Ferrari, and Ferrari no longer lists AMD on its website.

The partnership between AMD and Mercedes-AMG is for multiple years, and the first sign of the sponsorship will be visible on February 14 , when the 2020 Formula One season kicks off. On that day, Mercedes-AMG will run its 2020 F1 car for the first time. The car will boast AMD branding on the side, and Lewis Hamilton and Valtteri Botta will drive it.

"Innovation is at the heart of Formula One. We always try and push the technological boundaries in our hunt for performance," said Toto Wolff, Team Principal and CEO of the Mercedes-AMG Petronas Formula One Team, in a statement. "We are delighted to have AMD join our team as a partner and we look forward to the journey ahead of us as we explore sophisticated solutions to unlock untapped performance potential."

In addition to having its racecar rock AMD logos, the partnership means AMD's namesake will also be on driver's and team member's clothing, the tracks' infrastructure and on the engineering station. Meanwhile, Mercedes-AMG's team will use laptops equipped with AMD Ryzen Pro CPUs and servers with AMD Epyc chips.

“At AMD, we are at our best when we create disruptive technologies that push the envelope of what is possible in high-performance computing,” said John Taylor, chief marketing officer at AMD. “We are thrilled to join forces with the Mercedes-AMG Petronas Formula One Team, a team operating at the cutting edge of technology and with whom we are a shared spirit in delivering incredible innovation and performance from the factory to the racetrack.”