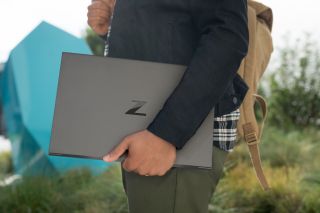 HP is taking aim directly at Apple’s grip over the creative market with its latest ZBook workstations. The two new laptops are set for release later this August and purportedly running “33% faster than the Macbook Pro 16” on Adobe Photoshop and Adobe Premiere Pro, along with “7 times faster” for rendering tasks, according to HP’s internal testing.

The company’s latest ZBooks, dubbed ZBook Studio and ZBook Create, are targeted directly at the professional market, with both products promising to be as powerful as possible within their small 15 inch frame. HP claims that the Studio is the “world’s most powerful mobile workstation by cubic centimeter” and that the Create is the “world’s smallest 15 inch laptop for creating and gaming, as well as the world’s smallest VR ready laptop.”

The ZBook Studio and ZBook Create share many of the same specs, including a 15.6 inch 4K HDR IPS display, which leverages HP’s “Dreamcolor” technology to offer 100% DCI-P3 color accuracy to creators of visual media, along with a respectable range of ports, a fingerprint scanner and facial recognition. The laptops also both feature Bang & Olufsen speakers, with bass down to 150 hz and volume up to 179 db, for accurate audio workflow. HP has yet to release any information about storage or memory.

Each machine also has an identical design, which reinforces the target HP is placing on Apple’s back. Not unlike Macbooks, the newest Zbooks are thin, light, and feature a minimal gray color scheme along with a lightly stylized “Z” logo where a Macbook’s Apple logo would be. Most noticeable is the keyboard, which attempts to replicate a Macbook’s keyboard in both feel and shortcut location, to allow an easier transition to PC for longtime Apple users.

Where the laptops differ, however, is in their CPUs and GPUs, which are specialized to match specific workloads.

The HP ZBook Studio, for example, comes with up to the latest generation Intel Xeon for its CPU, while its GPU options focus on Nvidia’s Quadro line, up to an RTX 5000.  The intent here is to run certified 3D modeling apps like Maya, Catia, and Creo as efficiently as possible.

The HP ZBook Create, then, comes with up to an Intel Core i9 processor, with GPU options on the GeForce line all the way up to an RTX 2080 Super. While HP claims that the Studio is twice as fast as the Create in 3D modeling, the Create is meant to be 25% faster than the Studio in gaming, while also offering VR support. So, while it's meant primarily for creatives, it still might end up being one of the market's best gaming laptops.

For features, HP is including its “gaming class” Vaporforce cooling system, which uses 3-sided venting and custom reinforced fans, as well as the ability for both Zbooks to dynamically swap power between the CPU and GPU based on what works best for the task at hand.