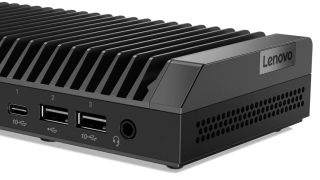 There's something about small, low-TDP fanless PCs that never fails to intrigue us, and Lenovo's latest creation is no exception. This one is powered by an AMD processor and comes with enough power and connectivity for simple, low-demand applications in Internet of Things (IoT) and industrial applications.

As spotted by Fanlesstech, the Lenovo ThinkCentre M75n IoT comes with AMD's Athlon 3050e processor, which has a TDP of just 6W. This is obviously easy enough to cool passively, and it's wired to 4 GB of memory and two M.2 slots.

The primary goal of Lenovo's new ThinkCentre M75n is as an IoT (Internet of Things) computer, to act as an efficient central hub for your various devices that don't act as IoT devices natively. Nevertheless, nothing is stopping you from using it as a normal PC, though with just a 6w processor it wouldn't make much sense. Given that this is a ruggedized computer designed for factory work and industrial applications, it will also cost far more than any competing solutions in the same 6W TDP envelope.

Thanks to this low TDP, Lenovo is able to entertain the following statement: "Thanks to tailored, triangular-shaped fins, the ThinkCentre M75n IoT dispels heat more efficiently than most other compact PCs. In fact, this industrial PC can handle temperatures up to 50˚C (122˚F)."

Connectivity is handled by a trio of USB 3.0 ports, two USB Type-C ports, two Serial ports, a DisplayPort connector, gigabit Ethernet, and a Mic/Headphone combo jack. There is an optional 802.11ac WiFi and Bluetooth 5.0 module available, too.

The system comes with Windows 10 Home installed from the factory, but it's also Ubuntu and Redhat certified.

No word on an exact release date other than 'soon,' but we do know that pricing will sit at $329.