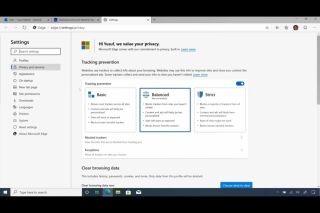 It's been almost 11 months since Microsoft announced that it would rebuild its Edge browser around the open source Chromium technology Google built for Chrome. Now the company has finally revealed that it plans to officially release this new version of Edge on January 15, 2020, provided development goes as expected.

Microsoft previously announced during the Build 2019 developer conference in May that it would release the Chromium-based Edge on macOS as well as Windows 10. It turns out Mac users will receive the same treatment as their PC-reliant counterparts; Microsoft said the new Edge for macOS will also debut on January 15.

It was at the Build 2019 developer conference that we learned Edge would also feature an Internet Explorer mode for viewing legacy sites as well as additional privacy settings. Microsoft expanded on the latter today by revealing that the new Edge will feature new tracking protections that are enabled by default. It said:

We believe you should know who has access to your data and have the control to choose what you share. Microsoft Edge starts with tracking prevention on by default, so you don’t have to take any actions to immediately start having a more private browsing experience. With SmartScreen and Tracking prevention, we help protect you from phishing schemes, malicious software and new types of malware like cryptojacking. Microsoft Edge and Bing also now offer new InPrivate mode across your entire web experience so your online searches and browsing are not attributed to you, offering you more control over your personal data.

We had a pretty good idea that  Microsoft was getting ready to release the new Edge. A stable release version of the browser was found on the company's servers in late October, so even though it wasn't officially released, anyone curious about the update could use it. (So long as they didn't mind losing the current version to do so.)

Microsoft said the release candidate for its new Edge browser is currently--and this time officially--available for both Windows 10 and macOS. The company also said the new Edge will support roughly 90 languages when it debuts in January. More information about both versions of Edge can be found on the company's website.