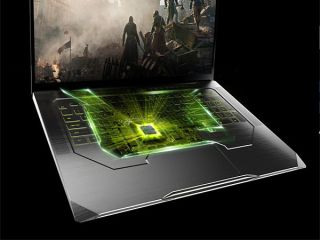 Earlier this year, Nvidia introduced its first Maxwell-based GPUs for the mobile space. Today, the company follows up with higher-end graphics processors employing what it’s calling a second-generation iteration of the architecture. The GeForce GTX 970M and 980M are the result. Unfortunately, our test samples arrived too late for thorough performance analysis, so we're delivering a preliminary report with as much benchmark data as possible. We’ll follow up with more detailed coverage once we’ve run through our full suite.

Both the 970M and 980M utilize the same GM204 die found on Nvidia’s desktop GeForce GTX 970 and 980 graphics cards. Those add-in boards are already known for their excellent power efficiency, compelling performance, and reasonable prices—all characteristics we’re certain system builders are eager to add to their gaming notebooks. Let's have a look at how the specifications compare between the desktop and new mobile products based on GM204:

The GeForce GTX 980M is essentially a desktop GeForce GTX 970 with one more SMM disabled, a 12 MHz-lower GPU clock rate, and 1250 MHz GDDR5 memory. Nvidia suggests that the GeForce GTX 980M delivers about 75% of the desktop 980’s performance, and based on these specifications, I don’t think that's an unreasonable claim.

As for the GeForce GTX 970M, it's a different animal with one 64-bit memory channel and render back-end disabled, yielding a 192-bit aggregate memory interface (instead of 256-bit), 3 GB of GDDR5 (rather than 4 GB), and 48 ROPs per clock (instead of 64). Naturally, that’s going to negatively affect performance. But power consumption should drop as well.

Nvidia is choosing not to disclose the thermal design power of either Maxwell-based mobile part, but a rough guess based on the GPU’s specs alone puts the GeForce GTX 980M in the 125W neighborhood, and the 970M somewhere around 95 W. Of course, that'd be maximum theoretical draw, which is significantly limited in real-world scenarios by thermal energy, form factor, and power consumption. This is especially true when running on battery, where lower power states kick in to shave off wattage.

Speaking of lower-power states, Nvidia makes bold claims (see above) regarding the company's BatteryBoost technology. Originally released with the GeForce 800M series, BatteryBoost monitors frame rates while gaming and pares back if a GPU’s performance potential isn’t needed to maintain a specified target. As a result, the graphics subsystem operates more efficiently, using less power as it works just hard enough to render smoothly. That frame rate target is configurable via GeForce Experience software, by the way, and the company claims to have made additional improvements since its original release. This is definitely a feature that we look forward to testing thoroughly with the GeForce GTX 980M and 970M.

Aside from BatteryBoost, the GeForce GTX 970M and 980M are endowed with the new features associated with second-generation Maxwell GPUs. That includes Dynamic Super Resolution (DSR) and Multi-Sample Anti-Aliasing (MFAA), Nvidia's ambitious Voxel Cone Tracing (VXGI) technology, VR Direct enhancements targeted at virtual reality head-mounted Display (VRHMD) users, and DirectX 12 compatibility. We'll go into depth into the features that specifically affect the GeForce GTX 970M and 980M in our upcoming review, but if you're interested in learning more about these in general, check out Nvidia GeForce GTX 970 And 980 Review: Maximum Maxwell.

For now, let's go to our preview benchmarks and see what we can learn about the mobile 900M series.

Keep in mind that these tests were performed with the 970M, not the top-of-the-line 980M. Despite this, the new GeForce chip handled every game we threw at it in single GPU mode at 1080p, averaging at least 38 FPS at ultra detail settings (usually much higher). It also beat out the GeForce GTX 870M by a significant margin. When both of the GeForce GTX 970M's were linked in SLI mode, though, the laptop never fell below 30 FPS when running in a triple-monitor 5760x1080 resolution. That is very impressive for a notebook.

Of course those tests were performed when plugged into an AC power source, so we're very keen to see how much performance the 970M can sustain with the BatteryBoost feature enabled. That's something we'll focus on in our upcoming review. In the meantime, the GeForce GTX 970M has certainly wowed us with the brute force that this GPU brings to the notebook market, either on its own or when paired with a twin in SLI mode. Soon we'll have a clearer picture of what the 980M can do, too, and we'll also learn how these chips perform under the constraints of battery power. The preliminary tests we've already run certainly give us good reason to be optimistic about the upcoming results, and we'll have those available for you as soon as we can.