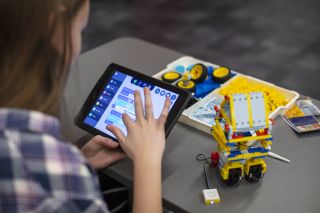 Attending a traditional day or sleepaway camp is the exact opposite of social distancing, so parents who want to give their kids summer activities are going to need to look elsewhere. UBTech, maker of the popular Jimu line of robots and the cutting-edge Walker robot, has an answer. The company's new Camp:ASPIRE initiative features a series of online, one-week courses that teach children serious robotic skills remotely.

Registration for Camp:ASPIRE starts today at UBTech’s website, and classes run each week from June 15th to August 24th. Each class is taught over Zoom by an experienced educator and involves using parts from a UKIT, which contains more than 300 pieces of lights, motors, wheels and other gear such as sensors. Kids will need to have an iOS or Android device in order to both attend class sessions and program the robots using UBTech's UKIT EDU app.

There will be four courses available, two of which are labeled as “beginner” level with the other two marked as “intermediate.” The beginner level classes will cost $400 and come with a beginner UKIT while the intermediate courses will cost $500 and have a slightly-more advanced UKIT. Each course will have 10 hours of live instruction and 10 hours of self-guided learning.

Considering that the UKIT Beginner and UKIT Intermediate kits cost $299 and $399 by themselves, you're really only paying an extra $100 for instruction. Both kits are already used by schools.

The two beginner classes are “Robotics, Coding & Engineering,” which provides an introduction to programming and robotics, and “Animal Robots,” which involves building robots that make animal-like movements. The intermediate classes are “Coding & Sensors,” which teaches students how to utilize sensors in their robot designs and “A Helping Hand,” which challenges kids to solve problems with their robots.

The UKIT Edu app features robust tools for designing, controlling and programming robots. Kids use UBTech's version of Google Blockly, a block-based language, for their programs. However, more advanced students will appreciate being able to see a preview of what the program would look like if written in Python.

UBTech plans to take up to 10% of its revenue from Camp:ASPIRE, with a minimum investment of $100,000, and use it to provide scholarships to those who can't afford the tuition. The company will have scholarship applications posted on this page of its site.