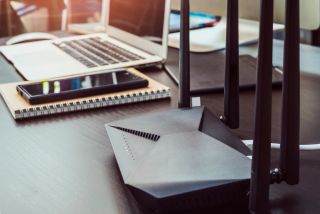 The Wi-Fi Alliance released a publication this week announcing a new term for certain Wi-Fi 6 devices. While Wi-Fi 6 devices come with an abundance of performance upgrades, Wi-Fi 6E devices include the additional perk of 6 GHz band support.

Devices labeled with Wi-Fi 6E will come with all of the performance expectations of Wi-Fi 6 devices. When announcing the Wi-Fi 6 standard in September, we detailed these performance upgrades which include 1024 WAM support, OFDMA, and speeds up to 3x faster than 802.11ac.

Wi-Fi 6E is a new standard that signifies which devices support 6 GHz Wi-Fi. These devices will be able to interact on the soon-to-be-released 6 GHz spectrum. Once the 6 GHz band receives the necessary regulatory approvals, the Wi-Fi 6E standard can go live.