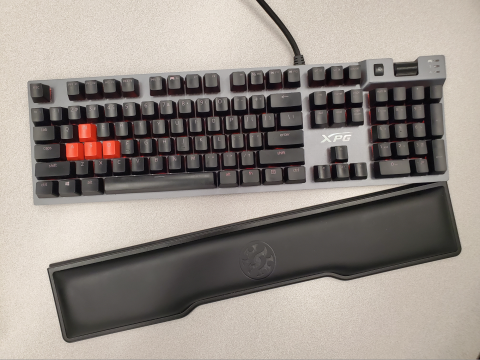 XPG’s Summoner features a comfortable wrist rest and a handy volume knob. But a lack of control software and a fairly high price for what you get means you may want to seek alternative options.

It’s tough to make a mechanical gaming keyboard that stands out these days. Some companies (like HyperX and Razer) create custom switches, and Corsair’s higher-end models (like the $200 K95 RGB Platinum XT) provide pleasing dedicated volume and media control buttons, plus a comfortable padded wrist rest in its $200 K95 RGB Platinum XT flagship.

Adata’s XPG gaming brand splits the difference with its Summoner, which sells online for between $120 and $140 at the time of this writing. It ships with your choice of three Cherry MX switches (our review unit came with Silver, and Red or Blue are also available), along with a comfortable detachable padded wrist wrest and a pleasing volume knob. But it lacks dedicated media control buttons (save for a mute button), which can be very helpful for times when you aren’t gaming.

The primary issue we have with this keyboard, however, is that there’s no software for controlling the RGB lighting or programming macros. Both can be done via the keyboard itself, but lighting controls are limited. And while the keyboard works well and mostly feels good, there’s not a whole lot else to set the Summoner apart from the plenty of keyboards with similar features --and more premium-feeling construction-- that cost less.

The Summoner’s design and build quality are a bit of a mixed bag. The sandblasted aluminum top plate looks and feels good, although some of the edges that overlap the plastic bottom shell feel a bit rough. The keyboard’s 2.1-pound weight is enough to keep the keyboard from sliding around on your desk, while also being lighter than many competing alternatives. That would make it good for gamers who travel, but the 6-foot braided cable is permanently attached.

As noted earlier, the keyboard features a nice metal volume wheel in the upper right, next to a mute button and indicator lights for gaming, caps and num lock. A handy USB 2.0 passthrough port hides at the back for connecting a gaming headset, controller or dongle for a wireless device.

The main thing missing here for me is dedicated play/pause and track forward/back buttons. These controls are integrated into the F10-12 keys as secondary functions. But as someone who spends more time listening to music while working than actually gaming, there’s really no substitute for actual physical media controls. The fact that XPG included a volume roller but skipped out on the rest of the controls here feels like a half measure, though those primarily interested in gaming may care less about easily skipping audio or video tracks.

One of the Summoner’s defining features is its padded faux-leather wrist rest. It both looks and feels good and nicely attaches to the keyboard via magnets. This is a feature I wish many more companies would include in the box with their keyboards.

But the plastic frame of the wrist rest feels a bit flexible and cheap. And I noticed that when gaming, the wrist rest didn’t feel wide enough, so I wound up detaching it from the keyboard so that my wrist could rest on it comfortably while my fingers sat on the WASD keys.

Also, I can tell you from experience that small crumbs tend to accumulate in the crack between the edge of the padding and the hard-plastic base.

The lighting under the generic-looking keycaps is good enough, if not as bright and vivid as on HyperX’s Alloy Origins. But there is no software, so what you can actually do with the lighting is much more limited than with most competing models. Holding down the Function key while hitting F1-F6 cycles through solid colors (F6 also toggles the Windows key-disabling game mode), while Fn and up/down arrows adjusts brightness (four levels, plus off). Hitting Fn and the right or left arrow key cycles through seven lighting modes, like rainbow wave, breathing, color cycling, etc.

Likewise, to record a macro, you first press Fn and F1-F5 to select a profile, then Fn and the right ALT key to initiate macro recording. You get 20 seconds to record your macro (up to 40 key presses, according to Adata), after which you have to press Fn and right ALT again to save your recording. Then, you press whatever key you want to bind the macro to.

This works, as do the hardware controls for lighting. But it’s not always easy to remember the control combos, meaning you’ll need to keep the manual handy. And while there are certainly users who prefer to avoid keyboard control software, the level of granular control here, with both the lighting and macro controls, is much more limited than what you’ll find with most competing keyboards and their software suites. And if you have designs on per-key lighting control for specific games or for a particular aesthetic, you’ll have to summon a keyboard other than the Summoner.

Our review unit shipped with Cherry’s MX Speed Silver switches, which are similar to MX Reds, but with a shorter travel distance. I’ve used these switches before, and they’re fine for gaming, though as usual I don’t feel like the shorter 1.2mm of travel (versus 1.9mm on Reds) gave me any advantage during my shooting and looting through the Handsome Jackpot expansion of Borderlands 3.

As for typing and other productivity work, I didn’t have any major issues with the MX Speed Silver switches, but very much prefer MX Blue switches, which are tactile and clicky, for that task. At the very least, it’s nice that XPG offers a choice between Silver, Red or Blue switches with this keyboard.

I like the wrist rest and volume rocker that XPG brings to the Summoner. As someone who spends several hours daily working while listening to music and gaming in the evening, these are features that I wish were available in far more mechanical keyboards.

And as a basic gaming peripheral, the Summoner is just as functional and about as comfortable as any other gaming mechanical on the market. But with dozens (if not hundreds) of competing keyboards available, most of which include software and many of which are priced around $100, the Precog is tough to recommend at $120 and up. While most keyboards don’t come with a wrist rest that’s as cushy as the Summoner, HyperX has a wrist rest solution that’s more comfortable and sells separately for less than $20.