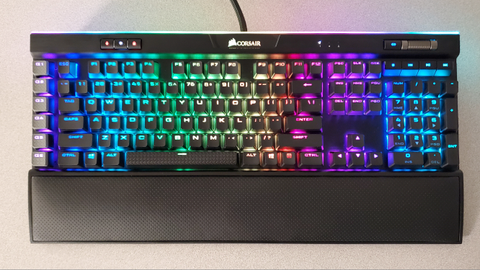 Corsair’s excellent flagship mechanical gets better keycaps, a comfy wrist rest and support for Elgato’s Stream Deck software. The upgrades are welcome and the hardware is great, making the primary drawback the $200 / £210 MSRP.

Corsair’s flagship K95 is a classic of the gaming keyboard realm, first arriving in 2013 with the RGB model arriving a year later. The company updated the K95’s Platinum RGB model in 2017 to include an RGB light bar up top and Cherry MX Speed switches alongside MX Blue and Brown options. In its latest iteration, the K95 RGB Platinum XT adds premium Double Shot keycaps, integrated Elgato Stream Deck software support for the six macro keys on the left side and an appreciated padded wrist rest.

If you’ve used one of Corsair’s high-end mechanical keyboards in the last few years, you pretty much know what to expect in terms of physical design here. The deck is made of a single bent piece of brushed aluminum. Dedicated media controls and a nice metal volume wheel sit above the number pad, with lighting controls and a Windows key lock on the above right. Six dedicated macro keys, (which can now be used with the popular Elgato Stream Deck software), run down the left side.

There are two major physical changes as compared with the 2017 (non-XT) model. More durable, premium-feeling Double Shot keycaps are now standard. They’re made with two separate layers of plastic --translucent white underneath to let the RGB lighting shine through and black over the top-- which aside from making them feel more premium and durable, should help them resist staining and wear.

Corsair also includes S-key caps to replace the pre-installed G-key caps, should you feel the need to more directly state that your extra buttons are there to do Stream Deck duty. Textured keys for WASD and QWERDF caps are also included, to help your fingers find their place in FPS or MOBA titles.

Secondly, the reversible rubber wrist rest of the previous iteration has now been replaced with a padded leatherette palm rest. The feel isn’t quite as cushy as the standalone HyperX wrist rest, but it’s a big upgrade from the rubber or rigid soft-touch plastic of most bundled wrist rests. My main complaint is that, rather than strong magnets,it attaches via long plastic clips under the keyboard, which feel like they could snap off after years of use if you aren’t careful. Given the high price of this keyboard, that’s not a great feeling.

As has been the case for years, Corsair uses a thick, permanently attached braided cable, which makes the K95 Platinum XT a little clunky and a lot less travel-friendly than models with removable USB-C cables, like the HyperX Alloy Origins. You do, though, get a USB 2.0 pass-through port on the back, near the center-mounted main cable, as well as cable routing wells on the underside. This makes the K95 a better option for those who do all of their gaming and typing at a single battlestation.

While other keyboard companies have partnered with switch makers to design their own mechanical switches or experiment with optical and / or analogue actuation tech, Corsair has stuck with tried-and-true Cherry MX switches. Two of the three options --MX Speed and MX Brown-- have been upgraded for even greater reliability, with the promise to stand up to 100 million keystrokes. But Corsair sent us the keyboard with clicky MX Blue switches, which are “only” rated to 50 million presses. The difference probably isn’t something you have to worry about unless you’re a young, prolific gamer who plans to hold onto their keyboard for decades.

I prefer Blue switches for typing, which made the K95 RGB Platinum XT excellent for my daily writing and editing tasks. And with a classic design, the K95 felt familiar while gaming. But clicky Blue switches aren’t the best for gaming, and I found myself missing the linear feel of Red switches or the shorter-actuating MX Speed switches while shooting and looting my way through Borderlands 3. If gaming is your main priority, I would definitely steer away from the MX Blue switches, as much as I like them for typing tasks. Those who are interested in switches other than the three Cherry options offered here will have to look elsewhere.

There are two software programs that you’ll want to install to take full advantage of the Corsair RGB. The company’s iCue software is a robust (if a bit clunky) program that lets you do everything from control the lighting (manually, or via pre-installed or downloadable presets), coordinate your lighting with other compatible Corsair devices, creating macros and manage onboard storage.

While iCue isn’t the most intuitive piece of software, it lets you do a lot and the company has an active forum where users post hundreds of downloadable lighting profiles. As fun as they are to play with, the most-used feature for me in iCUE is the Instant Lighting setting, which lets you easily choose a single lighting color for all your devices. Handily, black is one of the colors you can choose, which turns off all lighting so you can watch a movie or just get a respite from the blinking RGB rainbow.

The other software that the keyboard works with is Elgato Stream Deck. Corsair bought Elgato back in mid-2018 and its hardware and software popular among game streamers and YouTubers. So it makes sense that Corsair would integrate support for Stream Deck into its gaming hardware.

Using Stream Deck software, you can easily program the six dedicated macro keys on the left side of the K95 Platinum XT to perform any number of tasks, from launching common programs and recording clips to performing various chat tasks, changing your in-game voice and so much more. Once again, Elgato’s hardware and software are very popular among gamers, with a robust community busy creating plugins that will let you do just about anything with the press of a button.

In short, while there’s room for improvement, the software that the K95 RGB Platinum XT is designed to work with is second to none. Though you may have to fiddle with things a bit to figure out how to accomplish some specific tasks (particularly with iCUE), there’s a ton of functionality here that lets you do a whole lot with your keyboard. My only real complaint is that it’s a bit clunky to have two separate pieces of software for your keyboard controls. Hopefully in the future Corsair will combine the features of both into one software suite for simplicity’s sake.

I’ve tested dozens of mechanical keyboards over the years, and tend to keep going back to Corsair’s models when I’m not reviewing something else. I like their look and love the media controls and that luxurious volume wheel. The addition of Double Shot keycaps and a padded wrist rest easily make the K95 RGB Platinum XT the best version yet. And that’s before you consider that Elgato software support could potentially keep you from spending over $100 on a dedicated Stream Deck.

But unless this keyboard will actually save you from making that purchase, $200 is an awful lot to ask for a mechanical keyboard these days, even though this is one of the best there is. If you don’t need all these features, consider one of Corsair’s many more-affordable models.

And if your keyboard doesn’t spend nearly all its time at the same battlestation, consider HyperX’s excellent Alloy Origins. It’s smaller, lighter, has a removable cable and feels just as premium as this Corsair model at less than half the price (currently around $110). You won’t get the nice dedicated media keys and volume rocker (which, again, I very much like). But you can at least pick up HyperX’s wrist rest for about $15 and still wind up saving about $75 over this model from Corsair. Then again, the K95 RGB Platinum XT is true keyboard luxury, and luxury and affordability rarely arrive in the same box.