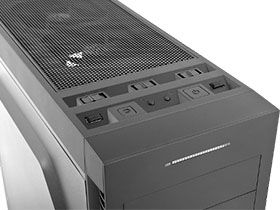 Building Inside The Antec P70

The P70 doesn’t have internal grommets. But cable passage holes are rolled over for a burr-free edge. Antec adds a couple of extra holes to clean up the installation of microATX boards. It also adds a lip at the front edge of the motherboard tray 9.75” from the back, though. Even slightly oversized boards won’t fit.

That gives you one 2.5” and four 3.5” internal bays, though the external 3.5" bay's integrated mounting bracket is also designed to attach hard drives. Screws for installing optical drives are mounted to sliding pegs that rattle around as the case is moved.

The P70 only has a pair of USB 3.0 ports, so there's just one corresponding USB cable. The front-panel LED cable is split so that it supports both Asus (three-pin spacing) motherboards and everyone else (two-pin spacing).

Surprisingly, the P70 has a cover plate for top-panel fan mounts, in case you want to move those fans to the front and keep dust from settling in through the top. It also comes with four sets of 3.5” hard drive rails, a set of twist ties for organizing cables, 16 foam washers for dampening screws and a screw pack with a bundled motherboard speaker.

Side panel bulges are required since the P70 has very little space for cables. Builders must lay cables out carefully to minimize crossing. Otherwise, those thin side panels can easily be warped.

The SSD bay requires straight cable connectors as well, which could be a problem on motherboards that only include right-angle cables. We reduced the number of power cables in our installation by using a four-pin drive cable and a four-pin-to-SATA power adapter.

The lack of space for slightly oversized motherboards like our X99S XPower AC forced us to use the smaller X99S Gaming 7. This is starting to look like bothersome trend with mainstream cases.

The P70’s power LED was bright enough to “blow out” the images we captured of it. We spliced two of them together rather than track down a bunch of extra foreground lights to minimize the effect. To the left of the main light row, two more lights indicate drive activity.