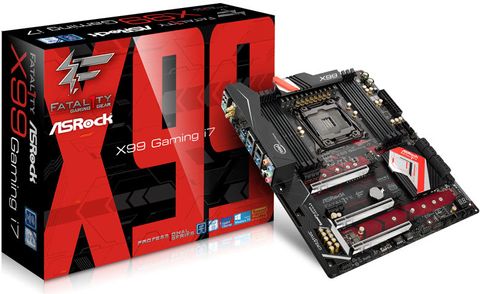 We're looking for oddities in the bench scores. Boring benchmarks are good benchmarks for motherboards. Dramatic score leads are typically due to motherboards cheating with hidden clock boosts, and a board lagging behind is usually a configuration conflict.

3DMark and PCMark don't reveal any problems of note. The Gaming i7 is a few points down in one, a few points up in another, but it's all within margin of error and normal variance.

The Gaming i7 trails slightly in Sandra Arithmetic, which could be worrying. However, we see no evidence of CPU slowdown in the other Sandra tests. One welcome change is the RAM bandwidth increase. It still doesn't match the MSI or Gigabyte boards, but the deficit is much smaller.

Cinebench and Compubench are right in line. DiskSpd shows a surprise with the Gaming i7 in a commanding lead in sequential write speed. This wasn't a fluke either. Three repetitions of the test all showed the board writing 1 GB/s in 128k sequential tasks.

Ashes and Metro are exactly where we expect to see them. The F1 2015 mark is helped a very small amount by the extra memory bandwidth, but it's still notably behind the MSI and Gigabyte boards. The Talos score is strangely low, though.

A slight loss in 7-Zip, Blender, and PowerPoint to the Taichi is paired with large wins in Illustrator and Handbrake. But on the whole, the scores marginally favor the Taichi.

The Gaming i7 uses more power than the Taichi, which isn't surprising given that it's designed to be a higher performing product. As such, the temperature increases too.

The Gaming i7 has a small overall performance edge over the Taichi, but it also uses more power, resulting in worse efficiency.

The Gaming i7 is a step or three above the Taichi in terms of overclocking. The Taichi's hard temperature limit considerably restricts top-end CPU clock speed and requires a sizeable decrease in ambient temperature to overcome.

The memory bandwidth increase is a much bigger jump. Although it still doesn't match the MSI or Gigabyte boards in all ranges, it's much more competitive. The Gaming i7 does show ASRock's trend of having lower bandwidth at 2800 MT/s rates, though.

The Gaming i7 maintains all the things that made the Taichi great. Triple GPU support (even with 28-lane CPUs), triple network connections, PWM on every fan header, dual 3.0 x4 M.2 slots, and dual UEFI. On top of that, it corrects the shortcomings of the Taichi, namely CPU and RAM overclocking. The CPU overclocking improvements are admittedly minor in terms of effect. In order to reach the CPU clock limit of either board, you would need to spend more on cooling than on the board, which is a very unlikely scenario. The RAM bandwidth improvements are quite substantial, however, and very welcome.

It doesn't stop there either. ASRock added a few extras. The Gaming i7 has bench testing buttons, an extra USB 3.0 header and one more USB 3.0 port on the rear. It may not be a big step up, but it's not something to ignore either. The Taichi was already so well equipped that's there's not much to add without greatly increasing the price. A better Wi-Fi card, upgrading to a 2x2 antenna, or Bluetooth 4.2 would have been possible. But adding 4-way GPUs or a Thunderbolt controller would require reworking the whole PCIe subsystem, greatly changing the existing features and the price.

As is, the Gaming i7's MSRP is only $20 above the Taichi. Do you get $20 extra performance out of the board? The additional power and reset buttons are certainly worth a few bucks. The extra USB 3.0 ports required adding a controller to the board, also another few bucks. Altogether we'd pay $10 - $15 extra for that.

But it's the RAM improvements that we find the most exciting. DDR4-3200 is a very common speed for quad kits. Of the 3200 kits, CAS14 is the second most common available. Not being able to buy any DDR4-3200 kit and simply hit the XMP button was a huge let down on the Taichi. The Gaming i7 lets you set it and forget it and also gives you a significant bandwidth boost even when using 2400, 2666, and 2800 RAM.

We find ourselves in a somewhat awkward position. The Taichi received a Recommended award—an award we are currently dissolving. We don't want to be too free with editor's awards, especially with two products so similar, but the Gaming i7 is on the same track. However, the key deciding factor in the Taichi's award was the price. It was often on sale for as much as $20 under MSRP, yielding incredible value despite its shortcomings. It was one of the cheapest X99 boards available, yet wasn't crippled. The Gaming i7 is at least as good in every way, and even better in many. The difference is you don't find it on sale and it has held steady around $240. So let's compare it to other boards in its price range.

The Gigabyte X99P-SLI is the closest competitor in terms of price. It boasts 4-way graphics support, Thunderbolt, superb memory performance, and it costs roughly the same. But the M.2 is only PCIe 2.0 with some CPUs, the fan control is horrible, and you don't get the extra network controls or PCIe storage of the Gaming i7.

The X99P-SLI is a niche board in some ways. Most people don't use 4-way graphics or Thunderbolt. Outside of those, the X99P's only bragging right is outstanding memory performance. The X99P loses a key feature—its 4-way SLI—with a 28-lane CPU, and its lone M.2 drops to PCIe 2.0 signaling. The Gaming i7's graphics ability is unchanged in this situation and still supports full PCIe 3.0 x4 storage. The Gaming i7 does so many things right and has a broader appeal because of it. It's the X99 board we would recommend in most cases in the $250 range. In the past, we'd have given it our Recommended stamp. For now, our Approved stamp is the most appropriate award to bestow.