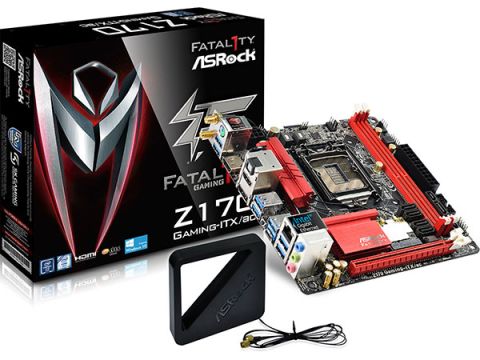 Previously a staple of office machines and entertainment PCs, Mini ITX became big business in the enthusiast PC market almost as quickly as manufacturers could shift their focus away from Micro ATX. It seems that the portable gaming PC market wasn't all that interested in SLI, and wouldn't need the extra slots afforded by Micro ATX for anything else.

That's not to say there haven't been growing pains, as the first Mini ITX cases were designed for AMD's failed DTX form factor. Indeed, the need for the case to have two slots continues as graphics card coolers remain two-slots thick. ITX remains constrained in the placement of drive connectors and voltage regulator components, yet companies continue to develop enthusiasts-level boards through a mix of engineering competence and sheer determination.

ASRock's latest foray into the compact gaming market comes with all the things needed specifically for that market, such as a voltage regulator large enough to support moderate overclocks, a high-performance Intel-supplied network port, an 867 megabit 2x2 Wi-Fi controller, and an M.2 slot that's hidden underneath so it won't consume as much space on the crowded top side. Knowing that overclockers often need to clear their firmware settings without digging around inside a crowded Mini ITX case, ASRock adds a recessed CLR_CMOS button to the I/O panel. The Z170 Gaming-ITX/ac even includes a third fan port where many of its competitors have two, since enthusiast gaming cases have both intake and exhaust fans in addition to the CPU cooler.

We even find a pair of USB 3.1 headers as Type A and Type-C, just in case you need to transfer a game via a 10 Gbps drive.

We just discussed how the Fatal1ty Z170 Gaming-ITX/ac might be a great gaming board layout, but it also has a few media-center-oriented features, such as its dual 4k-display supporting HDMI 2.0 ports and live encoding of multi-channel audio streams to a single digital output via DTS Connect. Yet the presence of only three rear-panel analog audio ports is a little perplexing, since anyone who doesn't have a DTS receiver will need to configure all three connectors as 5.1 analog output in order to accomplish true positional audio from non-encoded sources such as games. That doesn't leave any inputs, apart from the front-panel connector.

It's not as if there isn't space for the extra connectors, it's just that ASRock appears to believe this is no longer needed by most enthusiasts. That may be true, but we still remember that ASRock was still putting VGA connectors on enthusiast motherboards not-so-long-ago.

Little things make a big difference in Mini ITX internal layout, and some of ASRock’s big ideas include the PCIe 3.0 x4 M.2 connector being placed under the motherboard and the Front-Panel audio header being placed above the graphics card slot. The M.2 connector is also compatible with SATA drives, and ASRock made the smart choice of sharing only those SATA connections with the top-side SATA-Express port. That means the SATA-Express PCIe ports are always-on, and always-capable of supporting ASRock's own USB 3.1 bay device, if you can find anyone selling it separately.

Intel's LGA-1151 package appears perfectly situated for mounting 120mm coolers on the Z170 Gaming-ITX/ac, leaving around 1.3" of extra space for heat pipes (on downdraft-style coolers) between the fan and graphics cards. That also leaves space for even larger coolers, if they're offset in the proper directions to fit your specific case. The two caveats of using a large cooler with this board is that it needs to have clearence for whatever RAM is chosen, and that some of that same space is also needed for the four SATA ports on the CPU-side of the DIMM slots. The other two SATA ports, though shared with M.2, remain active if the M.2 SSD is PCIe-based.

The Z170 Gaming-ITX/ac includes two SATA cables and a Wi-Fi antenna. That's probably enough added hardware, given its intended use in Mini-ITX cases.

Next Page Software & Firmware
11 Comments Comment from the forums