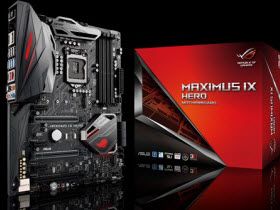 Asus’ Dual Intelligent Processors 5 (DIP 5) application is also unchanged from the previous review, and its 5-way optimization automatic overclocking function pushed our Core i7-7700K to 5.0/4.9 GHz (2/4 cores loaded) at 1.375V. Dropping to 1.33V under load, Prime95 crashed before the processor had a chance to reach its 100°C thermal threshold (where it would have forced a lower multiplier).

This Core i7-7700K sample regularly hits 4.80 GHz at 1.30V, and the Maximus IX Hero was no exception. The big news was in DRAM overclocking, where the board blew straight past DDR4-4000 to achieve record setting overclocks.

The Maximus IX Hero also includes some very well devised integrated overclocking profiles, including a Gamer’s OC Profile of 4.6 to 4.8 GHz at 1.325V, with XMP enabled. The DDR-4000 profile also worked at full stability with all four DDR4-3866 DIMMs installed, but called upon excessive voltage levels of 1.50V DIMM, 1.30V VCCIO and VCCSA. Unfortunately, the 5GHz profile allowed a Prime95 crash at 1.408V, even before that extra voltage could push this CPU to its thermal threshold. Some CPUs overclock better than others.

DRAM tuning fanatics are welcome to try their hand at optimized timings through the Maximus IX Hero’s full range of latency settings.

Tools include Asus EZ Flash GUI for flashing firmware, on-board storage of up to eight firmware configuration sets (profiles), plus the ability to export these to a USB flash drive, and “H-Panel” overclocking hot key functions.

Anyone afraid of messing with the Maximus IX Hero’s advanced settings can press their keyboard’s F7 key to switch back to EZ mode. On the other hand, those who want their systems to enter EZ mode by default must find that setting within the boot settings menu of . . . Advanced mode.

Prev Page Introducing The Maximus IX Hero Next Page Test Configuration, Results, And Final Analysis
16 Comments Comment from the forums
Be In the Know