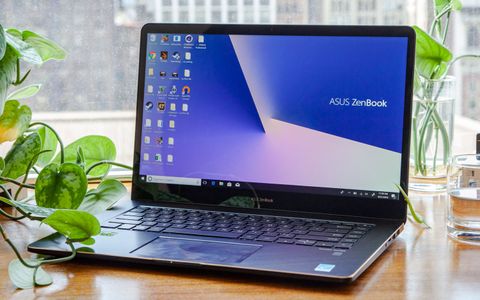 The Asus ZenBook Pro 15 is a strong performer with a beautiful design, but while the ScreenPad is innovative, it’s not fully baked and contributes to short battery life.

The ZenBook Pro 15 is opulent. The laptop, ($2,299 as tested, $1,799 to start) is a lavish machine, both on the outside with its good looks and on the inside with its Intel Core i9 CPU. It’s so extra that it’s got a second display under its touchpad. But that ScreenPad, while interesting, could use more time in the oven, and the laptop’s poor battery life means it’s not as portable as it should be.

From the outside, the ZenBook Pro 15 looks like a standard Asus laptop. That’s not a bad thing; its metal design is luxurious, though the company traded in a bright blue for a dark blue that looks black in some light. It’s also lacking the concentric circles many Asus notebooks have on the lids, providing a more conservative look. Asus’ logo is in a copper accent, and a copper color trim outlines the lid. It’s a design that would scream sophistication, but it’s too elegant to scream. It would just rather you just notice it.

Unfolding the notebook reveals not one, but two displays. The first is a 15.6-inch, 4K touchscreen surrounded by a moderate bezel. That second display is Asus’ ScreenPad, an innovative 5.5-inch screen built into the touchpad

The aluminum deck is the same dark blue as the lid, but with a subtle striped pattern, and the backlit keys use a copper-colored font to match the trim. A fingerprint reader is in the bottom right-hand corner.

The sides of the laptop are graced with a variety of ports. On the right side are an HDMI output and a pair of Thunderbolt 3 ports, while the left side has a headphone jack, microSD card slot and a pair of USB 3.1 Gen 2 Type-A ports. I would have liked to see a full-size SD card slot.

The ZenBook Pro packs an Nvidia GeForce GTX 1050 Ti with 4GB of VRAM. You can run most games at reduced settings just fine on it, but in the case of this laptop, the graphics card is more focused on providing a bit of extra oomph in creative applications like Adobe Photoshop.

Still, I was able to play Fortnite at a locked 60 frames per second (fps) on High settings, and the game ran nice and smooth.

Our review unit came armed with an Intel Core i9-8950HK CPU, 16GB of RAM and a 512GB PCIe-NVMe SSD, which all equates to extremely powerful performance for a notebook. Unsurprisingly, 30 tabs in Chrome, including one streaming an episode of The Daily Show with Trevor Noah, was no match for those specs.

Asus’ notebook took 10 minutes and 53 seconds to transcode a 4K video to 1080p in our Handbrake test. That’s far faster than the 20:38 average and the Surface Book 2 but is behind the MacBook Pro and the XPS 15.

To stress test the ZenBook Pro, we ran Cinebench 10 times while recording data with HWinfo. The Cinebench scores show the laptop quickly achieving a steady state but dropping hard between the sixth and seventh runs before returning to normal in the eighth run. Still, the CPU ran at an average of 3.4GHz and never dropped below base clock speeds. The average temperature was 93 degrees Celsius (199.4 degrees Fahrenheit).

The ScreenPad is a curious beast. It’s innovative, sure, even when Apple is already doing something similar in its Touch Bar. This 5.5-inch 1080p display is located under the Windows 10 precision touchpad. The glass surface is smooth, accurate and responsive to all of Windows 10’s gestures.

It measures 446 nits at its brightest and has pretty solid viewing angles. You can customize the wallpaper, but the big question comes down to how you’ll use the apps.

The ZenBook Pro comes with several pre-installed apps for the ScreenPad, including an app launcher for Windows 10, calendar, calculator, Spotify and a music player. Some of these are genuinely useful. I especially like the launcher, where you can put your most-used apps to start them quickly. And while there’s a calculator already in Windows 10, there is something about physically touching the buttons that just feels right. Additionally, apps for Word, Excel and PowerPoint put some often-used features at your fingertips, though they may not be impressive enough for you to change your workflow.

But other apps aren’t easy to use and set up. There is a tutorial in the ScreenPad settings that explains some of it, but I also found myself spending some time on Asus’ website looking things up. For example, ScreenPad Adobe Reader Sign comes pre-installed. The app lets you use your saved signature but doesn’t do anything without Reader on your system. And instead of telling you to go get Reader, it takes you to the Windows Store to download the ScreenPad app you already have. For the YouTube control, you need to go into the Chrome store and find a plugin. Don’t use Chrome? You can’t (at the moment) use ScreenPad as a remote for YouTube.

Perhaps the weirdest feature of ScreenPad is that you can use it as a second screen to run Windows. It’s a decent way to keep a Twitch stream or YouTube video in view when you don’t want it to take up room on your laptop screen. I was able to play Fortnite on it, but it was mostly as a gag — there’s no reason to do anything active on the ScreenPad.

And like Apple’s Touch Bar, you have to look down to use it. If you’re a touch-typist like me, you’ve been trained not to do that.  As a result, I had to put in extra effort while learning how to use it. Because the images on the ScreenPad constantly change, there’s no muscle memory to put to use.

Lastly, there’s just not a lot of use cases for the ScreenPad right now. Asus can make more apps, but it really needs more software vendors on board to make useful extensions. However, that’s unlikely, unless Asus makes a ton on their own or if similar screens make their way to competitors’ devices, making it worth developers’ time and money.

Of course, if you don’t like it, you can always shut the ScreenPad off altogether. It will still work as a mouse.

Oh, right, there’s a regular screen on this laptop, too.

The 15.6-inch, 4K touchscreen display is bright and vivid. When I watched the 4K movie Tears of Steel, I could make out the ivy on columns in a dark temple and one characters’ red shirt popped against a beige wall.

The screen measured an average of 330 nits of brightness, beating the 309-nit premium laptop average. But the MacBook Pro 15, XPS 15 and Surface Book 2 brought even more luminosity to the party.

Despite just 1.1 millimeters of key travel, the ZenBook’s keyboard is comfortable with just the right amount of click. On the 10fastfingers.com typing test, I reached 107 words per minute with a two percent error rate, both of which are fairly standard for me. The keyboard does feel a bit far back in the chassis, as the ScreenPad below it takes a lot of space.

The speakers on the ZenBook Pro are clear and loud. When I listened to The Gaslight Anthem’s “The Patient Ferris Wheel,” the vocals were clear and pronounced and were  followed up strongly by the guitars and drums. The bass, however, wasn’t very noticeable. The volume of the speakers filled a mid-sized conference room with ease.

To open up the ZenBook Pro, you’ll need to remove 10 tiny Torx screws. The bottom cover comes right off. The PCIe SSD is the only user-replaceable part.

Wherever the ZenBook Pro goes, the charger should go with it. That ScreenPad sucks up a lot of juice. The laptop lasted for just 4 hours and 5 minutes on our battery test, which continuously browses websites over Wi-Fi, runs graphics tests and streams videos. When we turned the ScreenPad off, that time boosted to a still lackluster 5 hours and 14 minutes.

The ZenBook gets just ever-so-steamy on the bottom. After streaming 15 minutes of HD video, it measured 102 degrees Fahrenheit on the underside, 94 degrees between the G and H keys, and 84 degrees on the ScreenPad.

I often don’t harp on webcams, but the ZenBook Pro’s is offensive. It’s a blurry, 480p mess of a camera. You should get better on a $2,299 notebook. When I tried it out, I could barely see the white stripes in my powder blue shirt, and the image looked foggy rather than sharp. No change in lighting or scenery can fix low resolution.

Besides all of the ScreenPad apps, Asus put a few other programs on the laptop. The most helpful is the Splendid utility, which lets you change the screen temperature and is excellent for working at nights. I usually find the Asus Giftbox, which contains programs from partners, to be an annoyance, but I suspect it will be the easiest spot to find new ScreenPad apps, should they arrive. Asus also added Netflix.

Our review unit had very little bloatware from Windows 10. Drawboard PDF and a Microsoft Store link to Photoshop Elements were the main offenders.

Asus sells the ZenBook Pro 15 with a one-year warranty.

The Asus ZenBook Pro 15 is a beautifully designed machine, no doubt, and it’s got power, too. Its screen is vibrant, and having the GTX 1050 Ti is good for entry-level gaming or creative tasks.

But the ScreenPad, while innovative and interesting, still needs some work. Without further development, the touchpad-turned-display is interesting but not a must-have. And it certainly doesn’t help with the ZenBook’s pitiful battery life.

That makes the ZenBook Pro recommendable for those who need a Core i9 and think the ScreenPad could greatly improve their productivity.But for the rest , you should still consider other options despite how pretty this is and how well it performs.