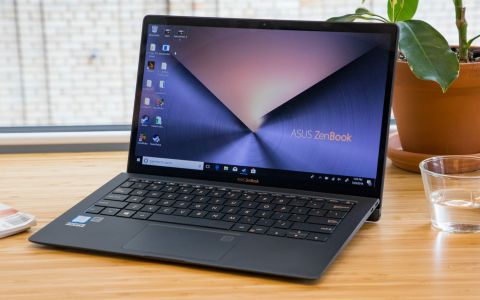 The ZenBook S delivers a few surprises with its winning keyboard and touchpad and elevating hinge. Although a couple of competitors fared better in almost every performance benchmark, the ZenBook S still performed solidly with typical workloads.

Asus’ ZenBook S ($1,499) is a portable dream, with a nice design, lean trim and an automatic propping mechanism. Its performance, with an Intel Core i7-8550U and 16GB of RAM wasn’t as powerful as some of the competition, but it won’t leave you hanging, either.

But the ZenBook S also has a few surprises on deck—literally, in fact, with an impressive keyboard and touchpad. Additional wins come from its hinge with a purpose and high display and audio quality. At the end of the day, this notebook might just check enough boxes to earn your ownership.

Asus says the laptop comes in "deep dive blue," but our sample looked pretty darn black to me. Bringing it into the light made the idea of navy blue more believable, but it’s hard for me to call the machine anything but black. It’s also available in "burgundy red," and the namesake is more apparent there.

In addition to its dark color, the laptop’s lid also features the trendy rose gold color in the Asus logo and a thin trim. The hinge subtly reads “ZENBOOK SERIES.” Completing the lid is a circular-brushed metal finish. I also appreciated that it’s cool to the touch. Unfortunately, the lid’s lovely design is heavily prone to fingerprint smudges.

The ZenBook S’ hinge does more than most. When you open the laptop, the lid moves down in such a way as to prop the deck up at a 5.5 degree angle, which is perfect for avoiding cramps while typing and gives the bottom of the laptop some breathing room.

The deck is the same alleged dark blue (but looks as black as the lid to me) with a matte finish. Its keyboard is written out in rose gold font. The fingerprint reader is on the upper-right corner of the touchpad.

The headphone and microphone jack are on the right side of the hinge. On the right side of the deck, you’ll find two Thunderbolt 3 ports, while the left side houses a USB 3.1 Gen 1 Type-C port. Unfortunately, the laptop doesn’t have any other ports, probably in favor of keeping things slim. If you use USB 2.0 or 3.0 or HDMI ports often like I do, you’ll need an attachment. Our review unit came with 2 dongles, one for HDMI and another for USB 3.0 Type A.

The ZenBook S comes with a 1.8-GHz Intel Core i7-8550U processor, 16GB of RAM and 512GB PCIe SSD. While it is a lightweight physically, I’d call the ZenBook S a middleweight in performance. I opened 20 Chrome tabs, including one streaming an episode of The Office on Netflix, and didn’t meet a single hiccup. I was even able to track through the episode at my leisure and switch between tabs rapidly without the ZenBook S slowing down.

On the Geekbench 4 overall performance test, the ZenBook S posted a score of 13,264, surpassing the category average. However, Asus's laptop fell behind the XPS 13 9370, despite it having the same CPU, and the MacBook Pro, which runs an Intel Core i7-8559U.

The machine was a bit more impressive in our File Transfer test, copying 4.97GB of files at a rate of 318.1MBps. This beats the average and the MateBook X Pro but doesn’t compare to what the XP3 13 9370 can do and is a joke compared to the MacBook Pro.

When it came to the Excel Macro Test, the ZenBook S couldn’t keep up with the XPS 13 9370, the MacBook Pro or the category average. It did, however, best the MateBook X Pro by 14 seconds.

The Handbrake Video Editing Test was another benchmark where the ZenBook S fell behind in performance. In this test, the laptop transcoded a 4K video to 1080p in 25 minutes and 59 seconds, more than 4 minutes longer than the category average (21:45). It was even further behind the XPS 13 9370 and MacBook Pro.

To get an even deeper look at the ZenBook S’ performance we put it through Cinebench’s CPU test, where it was relatively stable for 10 runs.  At the same time, we ran HWiNFO and found that the machine’s clock speed was running at an average of 2.1 GHz during the Cinebench test, while the average CPU temperature was a toasty 70.4 degrees Celsius (158.7 degrees Fahrenheit).

The display is an area where the ZenBook S shined brighter. When I checked out the trailer for Venom, small nuances, like Tom Hardy’s sweat, the fine details of the New York skyscrapers and shattering headlights, were very sharp. The viewing angles were also accommodating, with only a small amount of glare visible when looking at the screen nearly perpendicular, even during darker scenes of Venom causing mayhem in alleyways. The downside, however, was the screen’s reflectiveness, which was especially apparent on a sunny day and when the screen faded to black between scenes.

Asus allows you to alter the display with  its Splendid Technology program. The software has an Eye Care setting, which adds an adjustable sepia overtone, Vivid, for a brighter experience, and Manual, which lets you adjust color temperature to make it warmer (more red) or cooler (more blue).  Vivid mode wasn’t as powerful as I had hoped and merely made whites whiter on documents and spreadsheets. It made the Venom trailer look a tick brighter and only improved viewing angles by a hair.

The ZenBook S’ display performance can be attributed to its above-average coverage of the sRGB color gamut. However, all competitors were more vibrant than Asus's machine. Meanwhile, the ZenBook S’ brightness levels were also above average but lower than that of the XPS 9370 and MacBook Pro 13.

Both the keyboard and touchpad on the ZenBook S are unexpected hits.

The chiclet keyboard has a small, 0.9 millimeters of travel. However, with 70 grams of actuation required to push each key, typing on the keyboard was a surprising delight and produced awesomely audible clicking noises.

On a typing test on 10fastfingers.com, I was able to type 106 words per minute (wpm), slightly surpassing my 100 wpm average and, surprisingly, with no errors. The keyboard also has a backlight, but it didn’t pop through the button’s rose gold font in a light-filled room.

I truly enjoyed using this 4.1 x 2.4 touchpad. It was really smooth, allowing my fingers to glide effortlessly as if they were skating on an ice rink. Plus, the click is strong with this one. And Windows gestures, like three-finger taps, worked easily. The touchpad is also where you’ll find the fingerprint reader.

I put the ZenBook S’ speakers through the ringer with a listening of The xx’s “On Hold.” It did justice to both the instrumental and dance parts of the song with enough volume to fill a large room.

While I was satisfied with the out-of-box audio quality, Asus also includes ICEpower AudioWizard software with different modes for music, gaming, movies, speech and recordings and individual controls for bass, treble, widener, loudness, gain, frequency and bandwidth. The software also worked impressively well. Increasing the bass gave me the extra boost I needed to enjoy the song even more. If that doesn’t do the trick, the machine also comes with Dolby Access and RealTek Audio Console.

With a little elbow grease, you can open the ZenBook S and upgrade the PCIe SSD, but nothing else. You’ll need to remove 9 Torx screws of two varying sizes and then pry open the lid (that’s where the elbow grease comes in). Once you do that, on the right side you’ll see the SSD, which you can remove and replace by unscrewing one Philips screw.

The ZenBook S runs on a 50Wh battery and lasted 7 hours and 5 minutes on our battery test, which browses websites and streams video and webGL animations at 150 nits of brightness. This is below average and a tad disappointing for a laptop that’s so portable you’ll want to carry it around all day. Each competitor fared better by over an hour.

To test heat, we stream 15 minutes of HD video from YouTube and then check temperatures. The touchpad was 87 degrees Fahrenheit, the spot between the G and H keys was 101 degrees Fahrenheit and the laptop’s underside was 107 degrees Fahrenheit. While these temperatures are comparable to the MateBook X Pro, they are hotter than those of all other competitors and the category averages. I had hoped the ZenBook S would do better here given the natural elevation the hinge provides. Alas.

The HD webcam on the ZenBook S is decent. It picked up fine details of my skin and even a few out-of-place hairs. However, the background was washed out near sources of light, in my case, the ceiling lights and windows. Tilting the screen away from me a bit improved things, but then I appeared darker than I do in real life. Still, with the objective of the webcam being to spotlight me, the camera does an acceptable job.

I was happy to see our ZenBook S came preloaded with Asus Audio Wizard, Dolby Access, Quiet Fan and a shortcut to Asus Product Registration. However, it also came with some software I could do without - Asus Hello, Asus Live Update, Asus Splendid Video Enhancement Technology, Asus Keyboard Hotkeys and RealTek Audio Console.

Asus sells the machine with a 1-year warranty.

The Asus ZenBook S is a great machine to carry around. Its light, thin build feels great in your hands and looks even better. It had no problems managing my usual workload. However, the ZenBook S did worse than the Dell XPS 13 9370 and Apple MacBook Pro 13 (2018) in every performance test we ran. If you’re often juggling a large number of tasks, one of those machines might suit you better. Another point for competing laptops is in the battery life category. All three competitors, including the Huawei Matebook X Pro, lasted at least an hour longer than the Asus laptop during our battery test.

Still, I encountered no lag on light and average workloads, so the ZenBook S shouldn’t fail you for basic multitasking. And it earns redeeming points for a surprisingly fun-to-use keyboard and touchpad, helpful hinge, strong display and loud, yet customizable, audio. If those plus a stylish design satisfy your needs, the ZenBook S is the laptop for you.