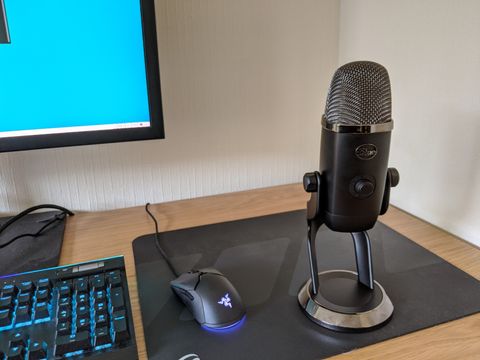 The Yeti X brings welcome updates to its controls and light customization for aesthetically minded streamers. But owners of the already-excellent standard Yeti don’t have much incentive to upgrade.

Obviously not content with being the world’s go-to USB desktop mic for as long as the world has wanted USB desktop mics, Blue rolled out a refresh of one of the best gaming microphones, the Blue Yeti, with the Yeti X. Targeted at gaming, streaming and podcasting for $170 at the time of writing, the Yeti X is supposed to be a significant upgrade over the Blue Yeti ($130) and the smaller Blue Yeti Nano ($100).

Thankfully, a bigger price isn’t all that discerns the X from its brethren. Active visual audio monitoring via a totally redesigned front dial sweetens the deal, along with a fundamentally improved mic unit with four capsules instead of three, and full functionality with Logitech G Hub software, including the Blue Vo!ce app. Blue Vo!ce applies a number of out-of-the-box filters, which Blue profess to be “studio-grade’” and to tighten up audio quality, reduce noise and bring you closer than ever to a super-professional, broadcast quality sound.

Its credentials and pedigree aren’t in doubt. But is it a case of marginal gains and diminishing returns with the Yeti X being a revamped version of a market-leading model with a heavier price tag?

This is a sturdy, handsome mic. Immediately more at home among pro audio equipment than rival mics from gaming-first companies like Razer, the Blue Yeti X lacks RGB zones and garish branding. The satisfyingly weighty base has a chrome finish that’s also around the band below the mic’s diaphragm and the Blue inset logos on the front and rear. At the front, the smart dial controls everything from gain and headphone volume to blend and mute.

The Blue Yeti X also has a different shape than the standard Yeti. It has a sharper and taller mesh section hiding four condenser capsules, as opposed to just three in the previous model.

MicroUSB and 3.5mm (for monitoring) inputs are at the bottom of either side of the mount. At the rear, a single button switches between cardioid, stereo, figure-8 and omnidirectional polar patterns. This is a definite improvement over the previous dial designs, which could be a bit tough to operate and felt poorly aligned. But, like the multi-function dial at the front, the pattern button felt a little loose and plastic for a product at this price.

A word for image-conscious streamers: all the surfaces on this Yeti X show some degree of smudging when they’re touched, so you’ll need to keep a cloth and some polish handy if you want pristine streams.

Those minor gripes aside, Blue’s consistently reliable build quality continues with the Yeti X. It’s sturdy enough that knocks and bumps won’t displace it, and it feels built to last.

It’s also one of the more attractive models. Less is definitely more with something like a mic -- you don’t need it to sing its presence from the desktop, but instead focus on your own dulcet tones. Some will prefer the overtly gaming sensibilities of Razer’s Seiren range, like the Razer Seiren X, for example, and they’re well-built mics as well. But the Yeti X fits visually in a number of scenarios beyond streaming, from podcasting to music recording.

There isn’t much we want to improve about the original Yeti’s sound. It was the go-to mic for a reason, earning its stripes for full-bodied, punchy sound that delivers vocals sitting in the mix perfectly and instrument recordings that sounded close enough to, if not discernible from, studio mic samples for $130.

The first notable difference is in the capsule design itself. This time, four capsules comprise the Yeti X’s internal workings, and while the original could still manage four polar patterns -- cardioid, stereo, omnidirectional and figure-8 (also known as bidirectional) -- just the same as this one, in theory having an extra condenser capsule could improve the sensitivity and smoothness of the sound across those configurations. So it proves in practice, happily.

In audio terms, the Yeti X’s biggest improvement over the Yeti is in its improved recording quality, up from 48 KHz/16-bit to 48 KHz/24-bit. What that means in practical terms is that the Yeti X has a broader language for different loudness levels and is able to capture a much wider dynamic range than the original model.

Given our proclivity for slapping a compressor on everything and then uploading it to YouTube or similar services, which themselves heavily compress audio and video, you might wonder what benefit that brings. And it’s true that most audio you record won’t stay gloriously uncompressed and whispery. But just as headphones designed to reproduce hi-res audio still seem to sound better at CD quality, the Yeti X has a mildly fuller sound even when it’s been compressed slightly. It’s one of those ephemeral qualities in audio.

Most of the time I used the cardioid polar pattern, designed to pick up whatever’s directly in front of the mic and, thus, the best option for recording a lone voice. Omnidirectional mode was great for getting some room noise with an instrument recording or capturing group speech, while the bidirectional mode is fit for capturing two people talking or singing.

All these modes sounded fantastic. It was great to have a usable option for omnidirectional recording. If you had two Yeti Xs, you could place one in cardioid mode right up against a guitar amp’s speaker cone, for example, and another a couple of feet away in omnidirectional, then mix the two sounds together in your digital audio workstation (DAW) to get the blend you need.

While the headliner of the Blue Yeti X’s features is its software, it’s not short of impressive physical add-ons. The multi-function dial at the front is an elegant solution to putting more controls on the mic itself without turning it into a commercial aircraft cockpit full of buttons and dials.

Tapping the button of the center of the dial, you can cycle between gain, headphone level, mute, metering and blend. The latter works like a ChatMix scroll wheel on a gaming headset but instead of balancing vocal and game audio, it balances mic versus computer audio. So if you’re singing along to a backing track, you can adjust your levels on the mic itself.

And while you couldn’t quite call this an RGB mic, you can indeed customize the lighting behavior of this display and the polar pattern lighting display at the back via Logitech G Hub (Logitech owns Blue). It’s easy enough to achieve this, as the app lets you select colors for peak, high and normal signal levels, different polar patterns and even your mute color.

Mic monitoring sounds pretty good through the 3.5mm headphone jack, thanks to a 16-Ohm impedance and 100dB signal-to-noise. And it didn’t distort at higher volumes. But this isn’t enough to buy the Yeti X over the Yeti, as the Yeti can also do good mic monitoring.

What the Yeti doesn’t do is offer a suite of production tools bundled up in Blue’s VO!CE software. Cringe-inducing exclamation mark aside, this is a real value proposition. Essentially, it works like a series of plugins in a DAW and brings 11 presets (though you can save and share your own custom presets) to your fingertips. These combinations of pre-tuned noise-cancellers, compressors, limiters and specialized EQ tools (a de-esser and high-pass filter) all sound polished as soon as you apply them, and you can tweak the individual parameters manually from there.

This might be the biggest selling point for the new Yeti X, and an extra $40 doesn’t seem outrageous for easy plug-ins to apply to your recordings. That’s a different story if you already run the Yeti into a DAW and apply your own plugins, of course.

The question isn’t whether Blue’s new higher-priced Yeti X is a good mic. Of course it is. The Blue Yeti X carries over the same build quality, smooth sound and easy operation from the baseline model, and the new features really do add value.

The question is whether the Yeti X is $40 better than the original Yeti, and, frankly, we think the Blue Vo!ce suite and ease-of-use brought on by the new multi-function dial cover that.

There is a proviso or two. Yeti owners probably won’t feel satisfied by shelling out on an entirely new mic for a handful of new enticements. Likewise, producers who already run their recordings into a DAW and apply plug-ins of their own won’t need the software suite.

For everyone else -- that is, those who haven’t invested in a desktop USB mic yet -- the Blue Yeti X should be number 1 on your shopping list.