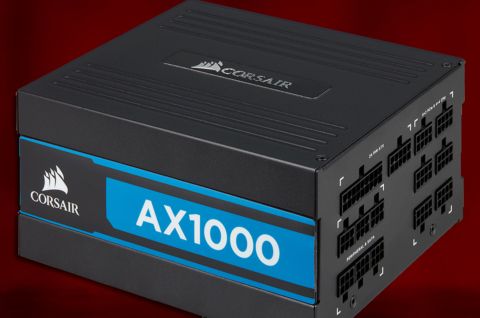 The following charts show the main rails' voltage values recorded between a range of 40W up to the PSU's maximum specified load, along with the deviation (in percent). Tight regulation is an important consideration every time we review a power supply because it facilitates constant voltage levels despite varying loads.

Corsair's hold-up time is long enough to satisfy the ATX specification's requirements and its power-good signal is accurate. We couldn't ask for more from the AX1000.

According to our measurements, the AX1000's inrush current is kept under control with both voltage inputs.

Next, we plotted a chart showing the AX1000’s efficiency at low loads, and loads from 10 to 110 percent of its maximum-rated capacity.

As you can see, the AX1000 is highly efficient under normal and light loads. We're not surprised, of course: this is an 80 PLUS Titanium- and ETA-A+-certified PSU.

The fan does its job well, given the temperature differences that our equipment recorded.

Under loads as high as 300W, the fan doesn't spin. Between 300W and 900W, the fan's rotational speed stays fairly low, limiting noise output as well. It's only under very high loads (and elevated temperatures) that the acoustics become bothersome.

Even under normal operating temperatures, the passive mode doesn't last long if load on the minor rails increases too much. Apparently, the DC-DC converters responsible for handling the 5V and 3.3V rails need active cooling once they're pushed hard.

Overall, though, Corsair's fan profile is conservative, even under demanding loads.

Prev Page Features and Specifications Next Page Protection Features, DC Power Sequencing, Cross-Load Tests and Infrared Images
9 Comments Comment from the forums
Be In the Know