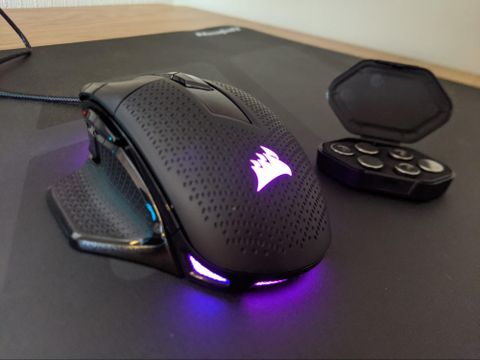 The Nightsword will likely take some getting used to, but its unorthodox shape works surprisingly well, particularly in shooters. It's not without its flaws, though.

Corsair's aims its Nightsword RGB squarely at FPS and MOBA players. It features a whole lot of RGB, adjustable weights and a pretty unusual shape. How comfortable a mouse is comes down to numerous personal variables, like your hand span and grip style. So it makes sense that Corsair tried to make the Nightsword cater to as many users as possible by making the mouse's weight adjustable.

At the time of publishing, the Nightsword is enjoying some of the best Black Friday tech deals and is on sale for $58.72 / £70.32, yet carries an MSRP of $80 / £70. We currently list the Razer DeathAdder Elite ($30 at the time of writing) as the best gaming mouse for FPS, but the Nightsword looks to rival it with a radically different shape and one more programmable button, for a total of eight. Without a like-for-like competitor already on the market, the Nightsword sets out to carve its own niche. And as far as we can tell from our testing, it's a niche occupied by people with big ol' hands and a penchant for shooters in between their Dota training regimen.

First thing's first: this is one of the tallest and most substantial mouse designs we've ever tested. It's a loosely similar chassis shape to the Corsair Scimitar, which caters to the MOBA crowd more with extra buttons, but the Nightsword exaggerates the height in such a way that someone with smaller digits is basically forced into a palm grip. With that said, its ergonomics seem on point. The slope at the rear feels very comfortable under the palm, while the scalloped left mouse button (LMB) and right mouse button (RMB) gently ease your fingers where they need to be. Those with shorter fingers might find some minor discomfort in the placement of their ring finger, however. Getting it all the way around to sit on the right-hand side requires a bit of a stretch, which didn't feel immediately natural to me, especially when compared to the ultra lightweight mouse I've been using lately, the Glorious Model O Minus.

A large thumb rest occupies the left side of the Nightsword, along with five - count 'em - thumb buttons. Two along the edge of the LMB adjust the CPI (counts per inch, also known as DPI) by default and feature a three-step light readout (similar to the Corsair Ironclaw) to help keep track of sensitivity. Just below those are the forward and back web navigation buttons and, finally, a sniper mode/ultra-low DPI button nestled underneath. This will be a recurring theme throughout this review, but shorter thumbs will struggle to get around this area with any precision. The sniper mode button is set far forward. That works if you're a natural palm grip player whose fingers sit right to the end of the LMB and RMB, but if you're more of a claw grip type, it's set too far forward to be easily accessible.

I also found that the ridge between the rubberized thumb rest and the forward and back buttons feels disorienting. It's not clear enough when your thumb's actually over these buttons. These minor issues are compounded by the wobbly nature of the DPI adjust buttons and the forward/back ones. Those all require quite a lot of force to depress and move around laterally quite a bit.

There's little to no lateral movement on the LMB and RMB though, which contributed to the overall feeling of comfort and stability as I gamed, particularly in shooters, which require whip aims and quick, sweeping movements. The build quality and feel of the mouse wheel is also great. It features a rubberized, zigzag design for grip and clearly defined bumps as you scroll. There's a satisfying and clear click when you click the wheel in too.

A mixture of finishes and materials make up the Nightsword RGB. I'm not sold on the overall look, but that's a deeply subjective area. Most of the body and the thumb rest use a textured, rubberized finish, which probably increases grippiness but in the real world also provides a haven for dust and grime. The left and right mouse buttons have a flat, matte finish, while a glossy black finish lines the outer edge and left side. Additionally, there are three RGB-lit mesh areas on the front of the mouse and three at the back. That's a lot going on in one mouse.

The Nightsword tips the scales at either 119g (0.26 pounds) or 144g (0.32 pounds), depending on whether you add the metal weights supplied in a separate case to circular fittings around the sensor. This unique design places the center of gravity right in the middle, rather than at the front or rear, as we've seen from other mice with optional weights. Whether that makes a profound difference on operation wasn't immediately apparent. However, it's clear that Corsair poured thought into this design.

To put the Nightsword's PWM 3391 custom optical sensor through the paces, I fired up 3D Aim Trainer. Its precision and ultra-fast 1,000 Hz polling rate made for reliable tracking overall. Perhaps less expected was that the Nightsword's juggernaut proportions worked really well in a reflex shot or whip aim setting, which requires long sweeps across the mouse mat. There's more to a good mouse than its sensor. It's a combination of ergonomics and technology that have to complement each other, and it really does work in a shooter setting.

That much was almost immediately evident from my next testing environment, Quake Champions. This is a very raw aim game, and after a little recalibration to swap the DPI buttons from the side of LMB to above the thumb rest so I wouldn't accidentally hit them mid-fight, it performed admirably. Once again, tracking fast-moving, jump-strafing enemies felt comfortable and natural. It didn't magically make me a better Quake player - sadly no gaming mouse will - but it melted into the background and let me commune with the game without distractions, which is all you can ask of your setup.

Next up: that other formidable aim-tester, Counter-Strike: Global Offensive (CS:GO). Although I don't typically use a low-DPI sniper mode, this is a more likely setting for that button than the rough and tumble of Quake. Once again, I found the button positioned slightly too far forwards for me to locate it quickly. That small issue aside, my performances stayed about the same as ever (I'll get you one day, Global Elite rank, but not today).

As mentioned, you get the option of having the Nightsword weigh either 119g or 144g. During gaming, I preferred the 'skinny' 119g configuration. It still felt weightier than many mice and its overall size probably exaggerated that sensation, but that's not to its detriment -- particularly with Age of Wonders: Planetfall. That game is not an actions-per-minute frenzy of an RTS, but a more sedate 4X (explore, expand, exploit and exterminate strategy game) typically played over long sessions. Here, the Nightsword felt comfortable for the duration and never impeded progress. This mouse is perhaps best-suited to shooters overall, with the button layout and shape playing particularly well in fast-paced situations.

You can go absolutely crazy with the RGB on this Nightsword if that's your thing. Using Corsair's iCUE, the three mesh panels at the front, Corsair logo on the top-rear and three mesh panels tucked away at the very back can all be programmed as individual RGB zones. There's also another under the mouse wheel too, but it's very subtle compared with the others. If your keyboard's made by Corsair too, it's possible to sync up RGB patterns across both devices. A fun five minutes, if nothing else.

Much more useful within iCUE is the ability to remap buttons, adjust the DPI steps and even calibrate for the specific surface upon which you use the mouse. However, I didn't notice a great deal of difference after I ran the quick calibration tool, which had me drew a few spirals at a set speed, but this might be a useful feature if you find yourself moving between soft and hard mouse mats often.

Gamers with larger hands, claw-palm grip hybrids and those who prefer a bit more of a substantial weight under their hand will all find a very worthy mouse in the Corsair Nightsword RGB. It's replete with added bonuses, like those RGB zones and adjustable weights, that you wouldn't expect for the price.

Conversely, the mouse feels cheap around the thumb buttons. And we're not sold on the textured, rubberized finish covering most of the mouse, either in the looks department or in its tendency to hold dirt.

But overall, the Nightsword is a solid mouse for those after something different ergonomically.