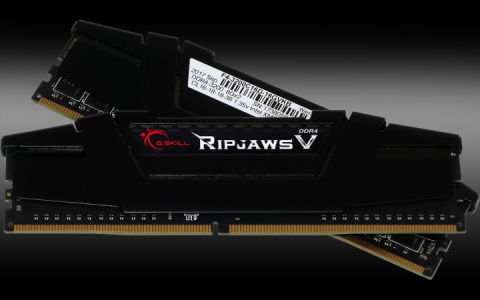 G.Skill has been earning its reputation as an enthusiast memory brand for years, all the while slyly undercutting the pricing of its top competitors' top kits. Quality has been the thing that’s kept G.Skill from being labeled as a “budget alternative” within the enthusiast market, but let’s be realistic: Lower pricing certainly hasn’t hurt its sales.

On the other hand, the middle of the enthusiast memory market (currently, memory rated DDR4-3200 to DDR4-3600) has far greater sales volume, far more pricing competition, and a far greater opportunity…for your opponents. G.Skill covers those bases with its F4-3200C16D-16GVKB DDR4-3200 CAS16, a 16GB dual-channel kit.

Unlike its gray model F4-3200C16D-16GVGB, the F4-3200C16D-16GVKB has black heat spreaders. On the day of this evaluation, that would cost you around $20. The memory underneath those spreaders doesn’t change, and there’s no discernible performance advantage to having black modules; the price of the gray version simply declined a bit faster than that of the black version. The black kit was shipped before the latest price changes…better luck next time?

A recent change in motherboard forced several retests, and today’s comparison includes the retested products plus the Mushkin Redline from a recent review.  The range includes ratings from DDR4-2666 to DDR4-3866, but the one kit that really stands out does so because it uses lower-density ICs: Teamgroup’s Dark ROG memory uses 16 512MB (aka 4Gb) ICs, and since eight ICs make a rank, each module is “dual rank.” A single-rank module of the same 8GB capacity uses eight 8Gb ICs. Intel’s memory controller works better with four ranks of RAM than with two, be that in the form of two dual-rank or four single-rank DIMMs.

A dual-rank DIMM using 16 of the newer 8Gb ICs would have a capacity of 16GB. As the older 4Gb ICs are getting harder for manufacturers to find, we look forward to adding more 32GB dual-channel kits to our review collection.

We’re expanding outward from our Corsair DDR4-4600 review by switching to a board that supports four DIMMs. MSI’s Z370 Godlike Gaming doesn’t have any memory overclocking advantages of the smaller board used in that review, but it has similar performance scaling and can push several of our kits past DDR4-4000. We’re also retaining the hardware from its review, including its GTX 1080 and Toshiba/OCZ NVMe SSD.