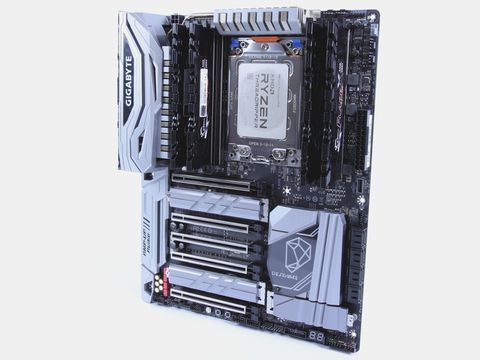 Ever since we transitioned to our Corsair 570X tempered glass enclosure, our temperature data has been straightforward. Using HWiNFO for sensor readings, the Tctl delta is a steady 27C, and overall all boards in the 570X are able to achieve CPU temperatures within 2 degrees of each other. More important for this chart are the regulator temperatures. Clearly the Taichi wins here, but it's interesting to see that the Designare is able to cool 5 degrees C better than the Aorus Gaming 7 with the same fan orientations. Be it fan speed differences, sample variation, or some other factor, the Designare’s design is well suited for overclocking and low-airflow cases.

Power consumption is always a difficult measurement to take and requires a lot of trial and error regarding background applications, operating voltages, and other environmental factors. For today’s comparisons, the Gigabyte X399 Designare is able to best its Aorus sibling in all categories and is comparable to the Taichi and Gaming Pro Carbon AC in all categories except complete system load. Again, this test is hard to control since we have to take into account Window’s ability to divert system scheduling to both power virus workloads as well as maintaining background processes. Regardless, the Designare performs well here, so let's see how she does with efficiency.

If we factor in the worst-case system load numbers from before, it’s tough to dethrone the ASRock X399 Taichi’s 20-watt lead compared to other boards. If we remove that metric from the chart, things become more visible, with the Aorus Gaming no longer being as bad from an efficiency perspective, while the MSI board slips due to its extra wattage under GPU load. However we spin the numbers, the Designare clearly performs better than its sibling and strikes a good balance compared to our other test boards.

Given its lineage and the success we had with the Gigabyte X399 Aorus Gaming 7, we expected that the Designare EX would perform well here. As always, increasing the multiplier to the 39.0 setting proves to be a simple task for this board with successful runs with both Prime95 and AIDA64.

Bumping to 3925MHz requires us to increase the loadline to the Aorus’ similar level with no additional voltage. With 4GHz still in our sights, logically we increased the multiplier to 39.5 and instantly achieved a black screen when loading Prime95. Increasing voltage appears to buy us some stability, but we hit our thermal threshold before we are able to gain our standard 8-hour acceptance time. With this defeat we continued to increase our multiplier to 39.75 and eventually 40.0 for 4GHz, but not even AIDA64 can run reliably at this point. Still, 3950MHz is a moderate overclock, and additional tuning might be able to squeeze more frequency or stability out of the system.

Armed with our Flare-X DDR4-3200 RAM kit, we engaged the default XMP profile for these DIMMs and had no issues running the AIDA64 memory stress test for 30 minutes. Seeing that our other boards hit DDR4-3333, we engaged that multiplier through the Gigabyte UEFI and saw mixed results across several attempts. Each reboot did work without the firmware re-trying its training routines, so it could just be that this particular motherboard sample couldn’t handle the extreme usage of AIDA64. As always, more tuning could probably get us to DDR4-3333 or higher, but as it stands we can engage XMP settings, which isn't always the case.

If the performance data didn’t impress you and the thermal and power data didn’t help focus your sights on a board, then money might be the defining factor. At the MSRP, the Gigabyte X399 Designare EX can be yours for between $10 to $20 more than competing products. Given the cost of the complete system, that probably is acceptable given the added features bundled into the product. X399 is a robust and feature-rich environment, so the added aesthetics, VReg fan and dual network controllers nearly justify it from this reviewer’s eyes.

Now, let’s talk sale prices and speculation. At the time of writing, each of these boards can be between $30 and $80 cheaper depending on the retailer and rebates available. With that kind of variation, the Gigabyte X399 Aorus Gaming 7 becomes our value king. That make it unpalatable to purchase the Designare EX unless you're happen to spend $60 on this board's looks alone.

Don’t get us wrong, the Designare is a great board. In the stock configuration, it performs better than some competing products. If aesthetics are a key feature for your Threadripper build, this board wins hands down--unless of course you crave lots of included LEDs. If it could hit similar overclocking results compared to the Aorus Gaming 7, we’d likely hand it an award. But given current pricing and the pesky comparison data that came from our testing, we have to temper our enthusiasm for the X399 Designare EX a bit, no matter how pretty and feature-packed it is.