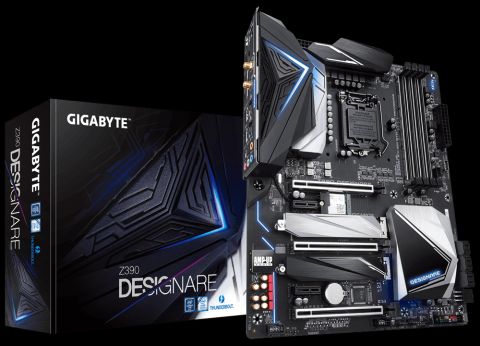 A bevy of high-bandwidth interfaces could make the Z390 Designare the best choice for creative types, particularly when considering many of those builders won’t bother to tap into the Core i9-9900K’s limited overclocking capacity. It's also reasonably priced for its extra features.

Intel’s Thunderbolt 3 gets too little attention on the PC side, compared to its ubiquity on modern Macs. But that doesn’t mean every creative type prefers macOS or overpaying for someone else to design their system. Gigabyte’s Z390 Designare uses Intel’s latest Thunderbolt 3 controller to add DisplayPort 1.4 passthrough from discrete graphics cards, adds a couple PCIe switches to allow builders to choose between SLI or a single card plus dual NVMe cards connected directly to the CPU, and even adds 1.73Gb/s Wi-Fi to its dual Gigabit Ethernet. The only shortcoming we could find with this board is a 50MHz CPU overclocking deficiency on our test CPU, that only has 250MHz of room to overclock anyway.

Power users, primarily computing enthusiasts who want to run professional applications from their PC, have always been a core part of the system builder community. It wasn’t so long ago that these users were rejecting clear side panels in favor of quiet cases, and the motherboards within those cases were nearly as dark when powered up as when powered off.

But as show system builders mingled flashing lights with gaming themes to promote the idea that a PC could look as flashy as is fast, that type of ostentatiousness was roundly rejected by those who didn't want to see what was going on inside their case anyway. And then the tempered glass case trend happened. Tinted tempered glass combined the tasteful style of professional machines with a hint of the flashiness of traditional gaming PCs, while keeping the noise inside. Gigabyte's Designare is a board designed for just that kind of build.

The Z390 Designare is packed with features that focus on creative types, like DisplayPort passthrough to support 8K resolutions via one of its two Thunderbolt 3 headers (assuming your graphics card can handle it). Buyers also get a pair of Gigabit Ethernet ports and 1.73Gb/s Wi-Fi with Bluetooth 5.0, giving users the option to set the machine up as a network hub while also supporting their 8K display and a bunch of Thunderbolt 3 external drives with up to 40Gbps of total bandwidth.

There’s a bunch of other features jammed into the I/O panel of the Designare. You get a pair of USB 2.0 ports for a keyboard and mouse, a PS/2 port for a legacy keyboard or mouse, a pair of (red) USB 3.1 Gen2 ports for drives up to 10Gbps, and four (blue and yellow) USB 3 Gen1 ports for drives or other devices up to 5Gbps.

Gigabyte also has internal storage gurus covered. The PCIe x16 slots are delivered in a configuration that supports x16/x0/x4 and x8/x8/x4 configurations (via CPU/CPU/PCH controllers). And its third x16-length slot can be configured (via a firmware setting) to use the CPU’s PCIe controller, thereby circumventing the PCH’s limited bandwidth. Choosing this setting causes the third slot to steal four lanes from the second (x8/x4/x4), but sets up a perfect configuration for a single graphics card and two PCIe 3.0 x4 NVMe drives. This might even be a better choice for three-way CrossFireX. Nvidia owners will be stuck with the default CPU/CPU/PCH connections however, since GeForce drivers require at least eight lanes per graphics card for SLI to be enabled.

Fewer slots mean fewer resource problems when it comes to M.2. Though the Z390 Designare has only two M.2 storage slots, its slots steal resources from only three SATA ports. The upper storage slot’s heat spreader conceals all six two-lane PCIe pathway switches for the modes discussed in the preceding paragraph. Above it, the CNVi Wi-Fi module appears in an odd location given its I/O panel antenna connectors. Below these slots are headers for front-panel audio, one RGB LED strip, a dual-port USB 2.0 front-panel header, two (of five) PWM fans, an Intel-spec front-panel button/LED group, and a front-panel extended group that supports a beep-code speaker and a legacy-spaced (three pin) power LED.

The Z390 Designare’s 12+1 phase voltage regulator is one iGPU-phase short of the 12+2 unit found on the Z390 Aorus Master, though we’re not sure that Intel’s integrated GPU needed the extra phase to begin with. Few high-end buyers have integrated GPU overclocking in mind. Other layout features include USB 3.0 and 3.1 Gen2 headers located above the top x16-slot’s center line, and forward-facing connectors for the six SATA ports and supplemental PCIe power. These features are all designed to ease card installation. Things that lack practical purpose in a finished build, such as power and reset buttons, have been omitted here. And while Gigabyte also omitted the Port 80 LCD display to reduce gaudiness, its occasionally-useful functionality for reporting error codes or temperatures has also been removed.

The Z390 Designare includes the usual driver and applications disc, hardware manual and software guide in the box, along with a Wi-Fi antenna, four SATA cables, a G Connector for easy connection of front-panel button and LED leads, and a cable to link a graphics card’s mini DisplayPort output to the motherboard’s DisplayPort input (for Thunderbolt 3 passthrough).