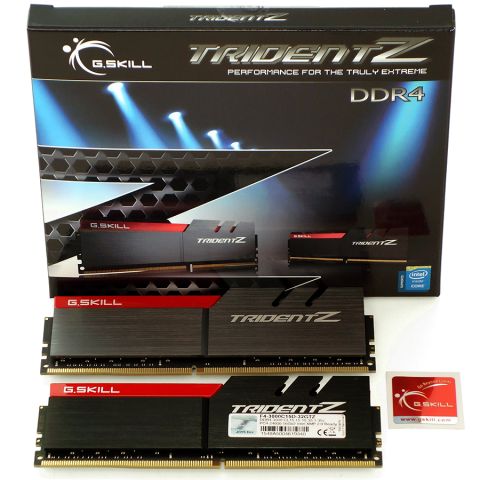 G.Skill's Trident Z model F4-3000C15D-32GTZ (32GB kit) is a relative bargain for builders who need more than 16GB of DDR4 and have only two channels to fill.

We see a nearly-universal appeal for increased memory capacity, yet not everyone can afford the 128GB kits destined for top "Prosumer" builds. Moreover, the majority of readers don't even have the eight slots required to add all those 16GB modules. Of course there are other markets where 16GB DIMMs could be worth the money, such as mini ITX boards that have only two slots. At 32GB a pair, all of us can finally have enough memory to leave 20 or so browser tabs open while doing office work. Or maybe that's just me.

Whatever your use for the extra capacity of 16GB DIMMs, G.Skill is willing to fill it with its Trident Z F4-3000C15D-32GTZ DDR4-3000 kit. You could even buy two of these kits to build your four-slot system up to 64GB, though G.Skill would rather sell you a different, tested together set for that.

Each 2x 16GB DDR4-3000 kit is programmed with moderately-tight CAS 15 timings at 1.35. Other settings are based on the JEDEC-standardized DDR4-2133 default. For most motherboards, switching to the higher "rated" setting requires one to enter the firmware UEFI and select the XMP profile.

We've tested 32GB kits in the past, but all of those sets used four modules. Today, we're comparing three two-DIMM kits—and three different capacities—side by side. Ratings for each kit trend towards the notion that lower-density memory overclocks better, but we'd like to find out if that's really true.

The memory controller of Intel's Skylake processor provides the best overclocking opportunity. Because of this, today's test system deviates from our X99-based "standard configuration" in that it has an LGA 1151 processor and motherboard.

The Z170 motherboard used in today's test was specifically selected for its ability to support both 2-DIMM and 4-DIMM memory sets at high data rates. Other components are carried over from our current Tom's Hardware Reference PC.

Next Page Overclocking, Optimization And Performance
15 Comments Comment from the forums