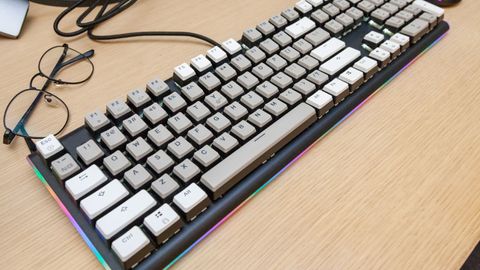 The ultimate typing keyboard, the Hexgears Impulse will make you faster and more comfortable, but it lacks dedicated software and its RGB lights are dull and bland.

If you love the feel of clicky keys (and if you don’t, you should), Kailh’s Box White switches are a revelation. These tactile keys have ever-so-slightly less travel than the traditional Blue or Green style switches but fantastic feedback that allows you to hit the keys frequently in a small timespan and with much greater comfort. The Hexgear Impulse is one of the very few keyboards that’s available with Kailh Box White Switches, and, thanks to excellent build quality that includes two levels of elevation, it offers a typing experience that’s second-to-none.

Available for just $89 with RGB pudding-style keys and a mere $79 for one with white / gray keycaps (no UK availability), the Hexgears Impulse gaming keyboard is a fantastic bargain, but it lacks dedicated software and has a less-attractive light show than competitors.

It doesn’t have the most premium design, but despite its low price, nothing about the Impulse looks or feels cheap. The top of the Impulse’s outer shell is made from painted aluminum while the bottom is black plastic, and on the inside, it uses a rigid metal mounting plate that gives it plenty of stability. A tapered top edge that curves down like a waterfall adds a nice touch of style. And speaking of water, the keyboard is IP56 water resistant so it can survive a small spill.

The Impulse is available in one of two styles. The $89 RGB style features colorful backlighting and “pudding style” key caps that have translucent sides and a black top surface with translucent markings. The $79 model has white backlights behind its solid gray and white keys (the letters and numbers are white while most special keys are gray).

Whichever model you choose, the caps are made from durable PBT plastic, and there’s an RGB light ring that surrounds the entire top surface. As is typical for mechanical keyboards, there’s a braided, non-removable USB Type-A cable that connects to your computer.

Unfortunately, the RGB model just isn’t that snazzy. The combination of the cloudy translucent plastic on the pudding keycaps and the muted light that shows through them leads to a visual experience that isn’t as vibrant as you get on other RGB gaming keyboards, like the Patriot Viper V765, Razer Huntsman Elite or Cooler Master SK621.

Though it doesn’t have colorful lights behind the keys, I prefer the look of the white and gray keys. The aesthetics on this monochrome model reminded me of my old IBM Model M keyboard, but with a touch of RGB magic from the ring.

Unlike some other keyboards that either have no feet at all or feet that lift it only a tiny bit off of the desk, the Hexgears Impulse has two sets of flip outs that give it different heights. With both feet retracted, the keyboard is a mere 0.8 inches (2cm) high, and with the smaller feet extended, that lifts it only a 0.1 inches (0.25cm) higher. However, with the larger feet enabled, the back of the keyboard measures a full 1.25 inches (3.2cm), a lift of 0.45 inches (1.1cm). That makes it noticeably taller than the Patriot Viper V765, which tops out at 1.1 inches (2.8cm). The added height makes typing on the Impulse that much more comfortable.

Wow, just wow. The Hexgears Impulse offers an amazing typing experience, which, as of this writing, is the best I’ve ever had on a mechanical keyboard. The clicky, Kailh Box White switches offer the perfect balance between feedback and resistance.

The keys feel lighter and easier to press than Blue or Green, but the tactile feedback is just as strong if not stronger, and the sound of the click is marvelous. Hexgears made the bold choice of putting a Blue-style switch under the spacebar only, because the largest key (which most people hit with their thumbs) should be a bit stiffer. At first, I thought that having a different switch under just one key was a weird choice, but I found the added resistance helpful. As a result, I enjoyed typing on the Impulse more than on the Viper V765, which has White switches under every key, including the spacebar.

Because of the fantastic switches, the solid, matte texture of the keycaps and the strong incline from the flip-out feet, I scored 111 words-per-minute with a 3% error rate on the 10FastFingers.com test. That’s my best score ever and far above my typical 95 to 100 wpm.

You can also buy the Hexgears Impulse with the non-clicky, but tactile Kailh Box Brown and Hako Clear switches. However, it’s the White Box option that we tested and recommend.

The Hexgears Impulse has no software at all; you control everything via keyboard shortcuts. On the bright side, you can count on the Impulse to work the same way whether you use it on a computer with Windows, Linux, macOS or even with a set-top box. On the dim side, you need to remember (or read) a lot of key combinations in order to change the lighting or set up macro keys.

Setting up macros is a fairly frustrating process. The very-limited instruction card, which is just a list of key combinations, is confusing. But eventually, with the help of a coworker, I figured out how to record macros and assign them to one of the five possible macro keys (Y,U,I,O and P). However, you can’t edit the macros nor can you change the timing of a recording to insert delays, because there’s no software. And, in order to use the macros, you first have to hit Fn + Y to active “macro mode,” which means that you can’t use any of those keys for their regular functions.

You can set per-key lighting on the RGB model, but there are only nine colors you can choose from for each letter. Want a royal blue instead of the dull blue that’s available? Get a different keyboard.

As is commonplace on any RGB keyboard, the Impulse also has a series of built-in lighting effects, such as breathing and wave motions. You can speed or slow these down and change the brightness level, but that’s about the only way to customize them. And, as I noted above, the color on the lights is bland.

The Hexgears Impulse offers a solid gaming experience. Whether I was playing a simple sandbox game like Lego Worlds, an epic adventure such as Rise of the Tomb Raider or a first-person shooter like Call of Duty II: Black Ops, the keyboard was responsive and easy to use.

If hitting too many keys at once is a concern, the keyboard lets you toggle between 6 key rollover and full key rollover modes by hitting Fn + ~. However, in my gaming experience, I never had an issue.

When it comes to gameplay, the Blue-switch spacebar is a double-edged sword, because if you need to jump rapidly you can’t press it as quickly as the White-switched spacebar on the Patriot Viper V765 (in fact, all of the White-switch keys on the Viper V765 seemed a little softer, perhaps because I had broken it in for longer). So what’s great for typing isn’t necessarily as good for fast-paced gaming.

The Impulse’s biggest gaming downside, however, is its lack of serious macro and lighting controls. While other keyboards have software that lets them customize their look and shortcuts by software, the Impulse gives you the same five macro keys for everything. There’s nothing you can do about the lighting, but you can have a better macro experience by installing third-party software, such as Clavier+ or AutoIt.

It’s far from a perfect gaming keyboard, but the Hexgears Impulse (with Kailh Box White switches) offers the best typing performance I’ve ever experienced, surpassing even my old-school IBM-style keyboard and others I’ve used with Cherry MX Blue or Razer Green switches. And at a starting price of just $79 for the more-attractive white/gray model, the Impulse won’t break the bank.

However, if you’re looking for a better gaming experience with superior lighting, macro creation and media controllers, the Patriot Viper V765, which has Box White switches, is a better choice. And if money is no object, consider the Razer Huntsman Elite, which combines a beautiful RGB light show, innovative Opto-Mechanical keys and a comfy wrist rest.

But if you want the ultimate typing experience and gaming and aesthetics are secondary to that, the Hexgears Impulse is the keyboard for you.