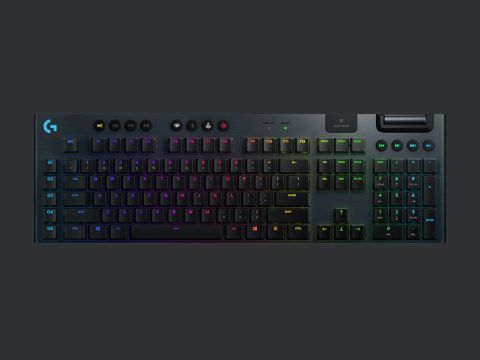 A brilliantly devised, happy medium between quick and comfortable gaming performance and stable typing, with grown-up looks and all the gaming features you'd want.

Keyboards are perhaps the hardest peripheral to gauge the gaming performance of. You get an immediate sense of a mouse's agility and responsiveness, and you can certainly hear the difference in sound cue clarity between headsets. But hand on heart, have you ever attributed a poor K:D to dodgy mechanical switches or an inadequate rollover?

And yet, despite the absence of empirical performance data, you know when you've found a keyboard that works for you. Logitech's preposterously expensive and just-as-preposterously luxurious G915 Lightspeed gave this reviewer that feeling of certainty from the first few taps. The low profile mechanical keys placed on an elegant slim top plate make for a much easier typing experience than you'll find on other mechanical boards, and although the aesthetic doesn't scream 'gaming' as loudly as Razer's boards, for example, Logitech's new flagship wireless keyboard performs as well as anything else on the market.

Retailing for £209/$249, it's priced beyond what most enthusiasts would consider reasonable for a keyboard, and thus the most important job it has is to justify that outlay by demonstrating why life is better with those low profile keys underhand. To that end there's a choice of three mechanical switches - called tactile, clicky, and linear, since we're not in familiar color-coded Cherry switch territory - a couple of lighting profiles, and three for macros, as well as hours' worth of tweaking to be had in Logitech's G Hub software.

It's worth noting upfront that so much of a keyboard's tactile experience is subjective -- after all, that's the reason for different switch choices and the very existence of a low profile board like this one as an alternative option to those with deeper keys and longer travel distance. What's good for one person's fingers might not be good for another's, but it's a bit more black and white when we get into build quality and functionality, so let's start there.

Logitech's GL switches have an actuation distance of 1.5mm, a total travel distance of 2.7mm, and an actuation force of 50g to register a key press. Compare that to Razer's proprietary switches, which range between 45-50g of force and 3.5mm-4mm of travel, and you get an idea of what exactly 'low profile' means in this context. The keys aren't set so low that they resemble an Apple keyboard and require the same amount of force, but with that shorter travel distance they're notably zippier in their behaviour than other mechanical boards.

When it comes to layout, everything is where you'd expect to find it, and ergonomically it's spot-on. We're also big fans of the look, which seems to draw on as many inspirations outside the gaming market as within it. Microsoft's Surface keyboard and Apple's Magic keyboard are obvious references, but the RGB lighting  and additional buttons for macros and media give a subtle assurance that the G915 can cut it in PUBG and Google Docs alike.

The aluminium plate is tastefully brushed and colored in gunmetal grey. Above the regular keyboard layout lie membrane buttons for recording and accessing macros, buttons for Lightspeed and Bluetooth pairing, a game mode toggle and a lighting control. An RGB-backlit Logitech 'G' logo sits on the top-left, which like every other key minus the media buttons can be customised by color. Above the numpad, you'll find what Logitech calls an edgeless volume scroll also finished in gunmetal grey (and unreasonably satisfying to use) above the rubberised media control buttons.

On the underside, you'll find two sets of feet, allowing you to maximise the tilt angle or halve the angle it's raised up at. There's no wrist rest supplied, however, which is disappointing. Sure, it sits closer to your desk just by virtue of its proportions so your wrists are at a less acute angle than usual, but for $249 the option to smooth that angle out just that bit more wouldn't have gone amiss. Particularly when boards priced well below this one from Corsair and Razer bundle them in.

Since it is such a slim board and it connects wirelessly, there's no USB passthrough here so you'll need to connect a mouse directly to your PC. Or, as we suspect Logitech would prefer, you could also use a wireless mouse too.

The sample we tested had GL tactile switches, which feature a small notch in the switch and thus give a discernible 'bump' as you press down so you can feel exactly when the key press is registered. The closest analog in the Cherry MX fold is the brown switch, although GL linear (think Cherry MX red) and GL clicky (producing a pronounced 'click' like Cherry MX Blue switches) are also available on this model.

Although there's some lateral movement to the keys if you wiggle them, they provide a stable base when you're actually typing which results in fewer mistakes in our copy. The shorter travel enabled me to type faster with confidence. Logitech's official line is that since the travel's 25% shorter you can type 25% quicker, but that sounds a bit optimistic.

As for wireless performance, dropout and lag are non-issues thanks to Logitech's bespoke Lightspeed tech. Rather than outsource the transmitters and receivers, they engineered Lightspeed end-to-end in house, from hardware to firmware. The result is a 1ms report rate which, according to the manufacturer, outperforms many wired peripherals. We didn't get a tangible sense of that higher performance specifically in the field, but it did feel as immediate as a wired board and we never had problems with dropout or dramas with pairing between multiple devices, even with multiple Bluetooth profiles.

In theory the low-profile design should mean you're able to make and register inputs faster in-game, and gain an advantage over the competition as a result. In reality, we all know how that goes - no amount of kit can substitute years of fine motor skill training and game sense gleaned from thousands of hours in a particular title.

A more realistic expectation of this keyboard is that you'll feel a little more lithe in your fingers, particularly if you never got totally comfortable with the traditional mechanical keyboard design. Our K:Ds in CS:GO and Quake Champions didn't take a noticeable upturn or downturn with this board versus the Corsair K95 we usually use, and really that's to be expected. What we did find was that our fingers stayed comfortable and, just as when we were tapping away into Google Docs, we didn't make mistakes.

The G915's game mode can be configured using Logitech G Hub, and the bank of G buttons on the far left also proves useful in-game for mapping to, say, mouse DPI adjust as an alternative to reaching for an awkward thumb button on the mouse itself. Or maybe you just want a handy one-button method for capturing video on Shadowplay or OBS. It's also useful for streamers who flip between apps for broadcasting, communicating and playing.

Especially commendable is the battery life. This board can go for 12 days, being used for eight hours per day, on one charge. Or with the RGB lighting off, 135 days.If you start running low at a crucial moment, frankly you only have yourself to blame. As for wireless latency, it's simply not noticeable. A non-issue.

Logitech G Hub is pretty painless as peripheral apps go. In just a few menu clicks, you're able to set up custom lighting schemes to replace or complement the three defaults, tweak the key-locking behaviour of game mode, and (with a few more menus to create a Logitech account) download other people's layouts and presets. You'll also need this software if you want to configure those G keys on the lefthand side.

The lighting itself could be sharper. Since there's clear air between the key and the board, you do see some light bleed out from between keys, but it's certainly not distracting or overbearing. You can even configure the lighting behaviour to sync up with audio if you like, an advanced feature for sure, but not terribly useful.

So is life really better with a $249 keyboard sitting on your desk? Well, you're certainly not going to see it reflected in your stats, but the G915 brings a fantastic combo of error-free typing, speed, and comfort. It looks smart and mature in a manner that very few gaming peripherals are able to put off, and - short of a wrist rest - it's replete with anything you could ask of a keyboard. You're not exactly slumming it with Razer or Corsair's slightly cheaper high-end boards by comparison, but for those who secretly miss the stability of the old membrane days, this is a dream come true.