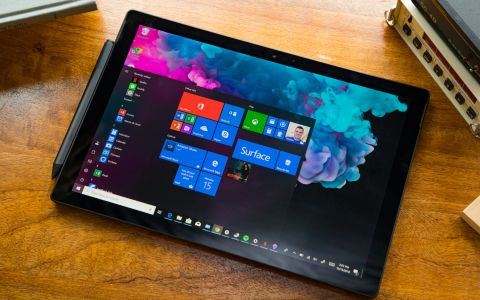 The Microsoft Surface Pro 6 is still the best detachable 2-in-1 around with a beautiful display and solid battery life, but its port selection is stuck in the past and its storage should be faster.

For a few years now, Microsoft’s Surface Pro line has has held its own as the best detachable 2-in-1. The Surface Pro 6 continues that trend but without much fanfare. The tablet ($899 / £879 to start, $1,428.98 / £1,373.98 as tested) has a new black color that makes it look sleeker than ever, but other than that, nothing has changed externally. That means, primarily, a lack of modern ports. But it has, finally, quad-core performance, and its display continues to be a showstopper.

The Surface Pro 6 is back in black, but that’s really the only thing new about its design. If you look at the alternative color, the standard platinum, it looks identical to last year’s model.

Granted, it’s still a pretty great design. It has an aluminum unibody case, and if you get the black version like I did, it looks pretty damn sleek. It’s spartan except for the reflective Microsoft logo on the kickstand. That stand, by the way, is still one of the best, most flexible and sturdiest among detachable 2-in-1s out there.

The 12.3-inch, 2736 x 1824 display has a 3:2 aspect ratio, which I find to be ideal for productivity (seriously, why don’t all non-gaming laptops have a 3:2 screen?), but is surrounded by thick bezels. Those house Windows Hello cameras for facial recognition and provide a place to put your hands while using it as a tablet, but they’re still a little unsightly.

There’s just one port on the left side: the headphone jack. Below that is where the optional Surface Pen attaches with magnets. On the right side there’s a single USB 3.0 Type-A port, a Mini DisplayPort and the proprietary Surface Connect port. Like Microsoft’s Surface Laptop 2, these ports are questionable. It’s weird to see Microsoft making the vision other 2-in-1 vendors should strive for and not include either USB Type-C, or, for this price, Thunderbolt 3. I’m glad to have full-size USB, but I'd readily swap out Mini DisplayPort for USB-C instead. The proprietary port works with Microsoft’s Surface Connect dock, but there are plenty of Type-C and Thunderbolt 3 docks out there that could provide similar functionality.

With a Intel Core i5-8250U CPU, 8GB of RAM and a 256GB SSD, the Surface Pro 6 is a competent ultraportable. The move to quad-core is a nice jump over the last generation of Surface Pros.

Microsoft’s tablet paired 65,000 names and addresses in our Excel test in 1 minute and 12 seconds, beating the 1:27 average and both of its competitors.

On our Handbrake test, it took 23 minutes and 22 seconds for the Surface to transcode a 4K video to 1080p, which is slower than the average (20:34) but speedier than both the ThinkPad X1 Tablet and Notebook 9 Pen.

To stress test the tablet, I ran Cinebench R15 on a loop 10 times. It ran smoothly until run 5, when it took a dip, boosted up until run 8 and began to start the pattern again.The CPU ran at an average clock speed of 2.6GHz; it typically ran around 2.7GHz but had many dips to 2.4GHz and 2.5GHz that brought the average down. The CPU measured an average of 66.1 degrees Celsius (151 degrees Fahrenheit) during the stress test.

The 12.3-inch, 2736 x 1824 PixelSense display is bright and vivid, making it great for content creation or consumption. When I watched an FHD trailer for Aquaman on the Surface Pro, a sunset behind the titular hero emerging from the ocean was a beautiful series of pink, blue and orange.

Microsoft’s tablet covers 136 percent of the sRGB color gamut. That’s higher than the 130-percent ultraportable average and both the ThinkPad and Notebook 9 Pen.

It measured an average of 408 nits of brightness, just below the ThinkPad X1 (415 nits), but above the Notebook 9 Pen and the average.

Even with just 0.6 mm of key travel, I hit 110 words per minute on the 10fastfingers.com, which is about average for me, including my usual 2 percent error rate. The Type Cover buckled a bit while I typed but not bad enough to disturb me.

Unsurprisingly, the glass touchpad uses Microsoft’s Windows precision drivers, so all of my navigation and gestures were smooth sailing.

The Surface Pen also comes in black now but is otherwise unchanged. The stylus has 4,096 pressure points and reacts to tilting for shading. Its flat edge, which is also the location of a barrel button, connects to the side of the tablet for storage. The Surface Pen is one of the few styli that uses the back of the pen as an eraser.

The stereo speakers on the Surface Pro 6 are decent. They were loud enough to fill our lab with sound when I listened to Daft Punk’s “Get Lucky.” The vocals and guitars were clear, and the drums were snappy. But I could only just make out the bass’ lowest points, and a bassline that iconic deserves to come through loud and clear.

You can’t update the Surface Pro 6. It’s glued, not screwed, together. So if you think you might want extra RAM or more storage make sure you get the proper configuration (more on that below). Based on teardowns, those parts are soldered down too.

The Surface endured for a long-lasting 9 hours and 20 minutes on our battery test, which continuously browses the web, streams video and runs through OpenGL tests at 150 nits. That’s just below the ultraportable average of 9:28 but longer-lasting than both the ThinkPad X1 Tablet and Notebook 9 Pen.

After streaming 15 minutes of HD video from YouTube, the back of the Surface measured 32.4 degrees Celsius (90.3 degrees Fahrenheit) at its hottest point. Most of it stayed closer to 30, and a lot was even cooler. That’s certainly not too hot to hold while using it as a tablet.

The 2560 x 1440 webcam on the Surface Pro is sharp and color-accurate. My burgundy shirt appeared perfectly, and every strand of my hair slipping out from under my headphones was visible enough to make me feel the need to brush my hair. I would be happy to use this for video conferencing.

Microsoft is light with its preinstalled software. The only addition it makes to Windows is the Surface program, where you can adjust settings for the Pen, check the battery level for peripherals and get other information about your PC.

But even Microsoft’s Surface devices are plagued with the bloat that comes with every copy of Windows 10, like Drawboard PDF, Sketchable, Facebook and Netflix.

Microsoft sells the Surface Pro 6 with a one-year warranty.

If you’re getting a detachable 2-in-1, it’s hard to recommend anything over the Surface Pro 6. Sure, we saw a little bit of throttling on our tests, but the battery life outclasses other detachables, and the display is excellent. Using it is just a great experience. The biggest hangups are that the keyboard doesn’t come in the box, and there’s no USB Type-C or Thunderbolt 3.

The best alternative is the $1,395 Lenovo ThinkPad X1 Tablet, which comes with a keyboard and a stylus in the box. It, however, goes to the other port extreme, with two Thunderbolt 3 ports and a microSD card slot but no USB Type-A.

But Microsoft outclasses the ThinkPad X1 Tablet in design, display and battery life, which overall makes it nicer to use. If you’re looking for a detachable 2-in-1 that can handle today’s accessories, there’s no nicer better choice out there than the Surface Pro 6.