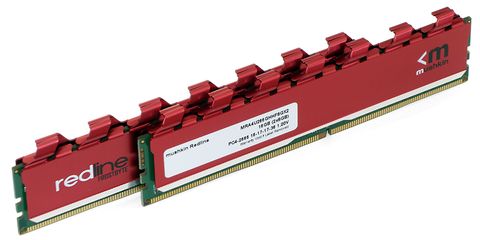 We start today’s review with a little latency tuning, to find out just how quick each module can be set without losing stability. As indicated, the Mushkin Redline 16GB kit can be tweaked one cycle lower than its default 16-17-17 timings. Two of the other kits will also be tested at DDR4-2666. Unfortunately, the motherboard could not automatically configure a workable set of secondary and tertiary timings to make the DDR4-3200 work at DDR4-2666. (Additional testing showed that the board would configure DDR4-2400 through DDR4-2800 ratios using its DDR4-2133 timing table, and DDR-2933 upward using its DDR4-3200 settings.)

Because the test board doesn’t support any of our modules at DDR4-4200 or above, we put the pedal to the metal using 19-21-21-42 timings at an Intel-accepted 1.35V. The Redline DDR4-2666 wouldn’t overclock to our next “test step” of DDR4-3200, so it’s competing based mostly on value pricing and latency optimization.

Sandra Memory Bandwidth shows the dual-rank kit outperforming everything else at any given speed. The lower-density DRAM ICs required to fill an 8GB module out with 16 “chips” are getting less common, however, and stepping up to higher-capacity modules (16GB-per-DIMM) has become the best alternative to finding “dual-rank” DIMMs.

With modest data rates and relatively poor timings (even when pushed to its limits), Redline DDR4-2666 will likely appeal only to buyers on tight budgets. Let’s see how this plays out in real-world apps.

F1 2015 is only GPU-limited when used with low-end graphics solutions such as onboard devices. Breaking past that boundary, it becomes CPU-constrained only on the lowest-clocked parts. Its memory bottleneck is most significant when performance parts are used throughout the system, and it’s there that we find that dual-rank is the better option, followed by optimized timings, followed by higher data rates.

Metro: Last Light Redux is a better example of how typical games respond to memory, as the game usually scales back only with extremely slow modules installed. Keeping it in the benchmark set helps us keep our perspective: Very few games will benefit in the way that F1 2015 does.

Blender’s CPU render is another application that punishes only poor memory configurations, and it shows the settings to be "good enough." If you’re using these kind of applications, you’re better off saving your money and settling for the DDR4-2666.

Here’s the payoff: The Redline DDR4-2666 kit isn’t cheap, but it’s cheap enough to knock the DDR4-3200 and DDR4-3866 out of the value race at both XMP and latency-optimized settings. The only configuration that beats it on value uses a pair of harder-to-find dual-rank 8GB modules.

Mushkin’s DDR4-2666 delivers decent-enough value that it earns a thumbs-up for money-minded buyers. We can recommend it to anyone looking to save a few bucks while running most applications that aren't affected greatly by higher data rates and lower latency settings.