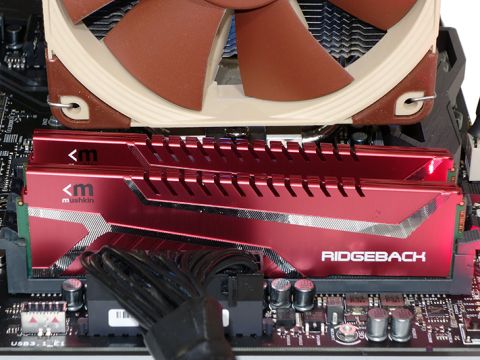 What started as a memory series with high-priced heat spreaders to help overclockers expel heat, the lower voltage of DDR4 has allowed Mushkin to scale back its Ridgeback design to become little more than an aesthetic treatment. You still get Mushkin’s top rated Redline modules under the skin, it’s just that the skin need not be as elaborate when covering today’s lower voltage ICs.

I like to start off with names that people can remember, and Redline Ridgeback DDR4-3200 is easily remembered. Conversely, the model number MRB4U320LLLM8GX2 isn’t. Because this is the only currently available 16GB dual-channel kit of Ridgeback DDR4-3200, you probably won’t need to remember that model number.

Ridgeback DDR4-3200 comes with highly conservative CAS 20 timings, bucking the enthusiast trendline of 1 cycle latency for every 200 MHz of data rate that has brought us DDR4-3200 CAS 16, DDR3-1600 CAS 8, DDR2-800 CAS 4, and DDR-400 CAS 2. Benchmarks will determine how this impacts performance, and we'll also drive the modules through traditional overclocking and latency optimization routines to find out how much performance has been left in reserve.

Regardless of what some readers keep saying, CPU-Z remains a relatively useful program for displaying a module’s top four timing sets in an easy screen shot format when deployed on most motherboards. It accurately shows DDR4-3200 (1600 MHz clock) timings available using a motherboard’s XMP setting, along with the DDR4-2133 (1066 MHz clock) CAS 15 timings that most motherboards will use when XMP mode is disabled.

Standing up to 1.65” (42mm) tall and rated at 1.35V, Mushkin’s Redline Ridgeback DDR4-3200 16GB dual-channel kit carries a (limited) lifetime replacement warranty. As with most manufacturers, its liability exclusions mean that if a single-bit failure causes your nuclear reactor to melt down, the company will replace the defective module (assuming you can still get to it) but won’t pay to replace the reactor. That is, unless it’s a Mushkin Reactor.

Recent improvements in motherboard firmware and circuit layout that are designed to complement the latest CPU memory controller revisions have finally produced a test system capable of exceeding DDR4-4000 when using top modules, without significantly exceeding the 1.35V DIMM limit suggested by Intel. A newer graphics card and storage complete our latest upgrade.