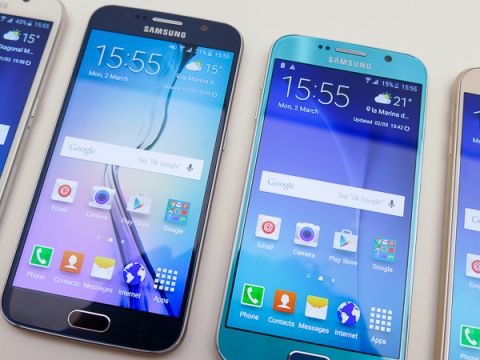 Since the release of the Galaxy S5, Samsung has been restyling itself to better compete in the current market. We’ve seen its new design-focused philosophy coalesce with each new product launch, culminating in the Galaxy S6 and S6 edge. The new Galaxy phones’ aluminum and glass construction and aesthetic detail are a radical departure from the S5.

The glossy exterior—along with the edge’s curved screen—may draw the most hype, but it’s what is inside that peaks our interest. The Exynos 7420 is the first mobile SoC built on a 14nm FinFET process, allowing the Mali-T760MP8 GPU and four A57 CPU cores to reach higher clock speeds for longer periods of time, or to consume less power when using the four A53 CPU cores for less intense workloads, relative to the last generation 20nm planar processes. Feeding the SoC with data is 3GB of LPDDR4 memory, which operates at higher frequencies and uses less power than last year’s LPDDR3 RAM. The Galaxy S6 is also the first device to use Samsung’s latest UFS 2.0 based NAND, whose ability to perform full-duplex data transfers and use of SCSI command protocols help apps launch faster and files save quicker.

Thanks to these new technologies, the S6 delivers excellent performance. It proves superior in nearly every CPU and system test, clearly outpacing the HTC One (M9), one of its primary competitors. Apps also open much more quickly—sometimes by as many as several seconds—on the S6 relative to other current generation phones. Gaming performance is also strong, topping the iPhone 6 in raw throughput primarily due to its Mali GPU’s higher clock speed. Comparisons to Qualcomm’s Adreno GPUs are more difficult since each architecture excels in different areas, with the Note 4 and M9 performing better in synthetic tests and the S6 scoring higher in actual game tests.

Samsung also includes several new or enhanced features for this generation. Coiled beneath the rear cover glass is the integrated wireless charging, supporting two of the three standards: WPC (Qi) and PMA. The S6 also gets serious about fingerprint authentication, swapping the cumbersome swipe-style sensor used in the S5 for a capacitive touch-based sensor, which is much more convenient to use and nearly as accurate as the iPhone’s Touch ID. This feature pairs nicely with Samsung Pay, a mobile payment system similar to Apple Pay, but capable of working with not just NFC enabled terminals but also traditional magnetic stripe credit card terminals.

The S6’s SAMOLED display is also much better than the Galaxy S5’s. It moves from a 1080p resolution to 1440p, increasing pixel density by 33%. While screen brightness remains on par with the S5 and Note 4, the improvements in grayscale and color accuracy make the S6’s display (in the Basic screen mode) the best looking we’ve ever seen. The curved screen in the S6 edge is also very good, but cannot match its flat-screened counterpart’s performance.

The S6’s overall imaging experience sees vast improvements as well. For starters, opening the S6’s Camera app is both easier (double-clicking the home button from anywhere) and faster (around one second). Once inside the app, there’s some new shooting modes and a refined Pro mode for making easier manual adjustments to camera parameters.

More importantly, the S6 takes great photos. The front-facing camera uses its new sensor’s larger pixels and higher resolution to capture detailed images with accurate color and minimal noise. The rear camera includes phase detection AF for faster, more accurate focusing; a new infrared color sensor for better white balance; OIS to reduce camera shake; and a faster lens which allows more light to reach the sensor—either the Samsung ISOCELL sensor from the S5 or the Sony sensor from the Note 4. In our comparative testing, the S6 with the Sony sensor produced stunning results, placing it ahead of the already impressive Note 4 and iPhone 6 in every lighting scenario it faced. Using the Samsung sensor, the S6 struggles with setting the correct white balance in less than perfect lighting and suffers from overly aggressive noise reduction algorithms. Unfortunately, there does not seem to be a way to know ahead of time which sensor an S6 will come with.

The rear camera lottery is not the Galaxy S6’s only transgression. The lack of a removable battery and microSD support, prominent features of past Galaxy phones, are certainly the most obvious and serious, but there are other minor issues too. While battery life is on par with the S5 at idle or when running light to moderate workloads, the S6’s higher performing SoC drains its smaller battery faster—around 10% to 20%—with more intense operations. The external speaker is weaker than the iPhone 6’s, and you need to fiddle with the equalizer to get good sound from the headphone jack. Also, the S6 edge’s thin sides and buttons make it feel a bit sharp when using it and difficult to pickup when laying on a table.

These relatively minor issues cannot eclipse the innovative hardware and useful features in the latest Galaxy phones, provided you can live without a removable battery and microSD support. Samsung’s stylish new flagships are the trailblazers for this generation—the benchmarks for performance and features. For this reason, the Galaxy S6 and Galaxy S6 edge are Editor Recommended.

Matt Humrick is a Staff Editor at Tom's Hardware, covering Smartphones and Tablets. Follow him on Twitter.