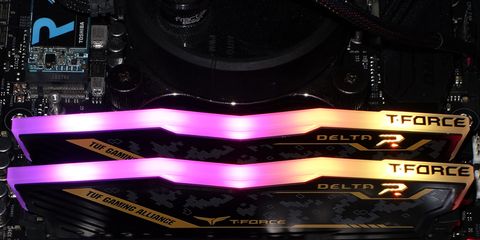 Team Group’s performance reliance upon Asus motherboards, along with the firm’s value pricing, makes for a perfect marketing alliance under the TUF Gaming banner. For those with compatible Asus boards, this is a good value.

Asus' Tuf Gaming Alliance includes memory from several brands, but Teamgroup’s participation in this joint marketing venture makes particular sense given the fact that we recently detailed the memory's preference for Asus boards. Team Group’s P/N TF9D416G3200HC16CDC01 includes two 8GB, RGB-lit DIMMs. Oh, and in case you were wondering, TeamGroup also officially supports all three formats of its brand name, although we'll try to stick to Team Group from here on out.

As the Tuf series focuses on gaming value, the Tuf Gaming kit uses moderate 16-18-18 timings to boast a DDR4-3200 data rate without breaking past mid-market pricing. Getting to the kit’s frequency and timings requires a processor and motherboard that supports overclocking, and automatic configuration requires a board with XMP-enabled firmware. Excluded processors are mainly low-end Intel models (including the “unlocked” Core i3-8350K). And speaking of Intel, you’ll need a Z or X-series chipset to go past DDR4-2666.

If for any reason you’re not able to set XMP or a related AMD-friendly variation, the modules will default to DDR4-2400 CAS 16. We’ve even spoken to some users of OEM Z-series boards that were unable to set XMP, so it’s best for those attempting to upgrade a factory-built PC to check their motherboard’s firmware before buying high data-rate memory.

Delta Tuf Gaming RGB modules support both the T-Force Blitz and Asus Aura app to control lighting. But installing both simultaneously causes the Blitz shortcut to reroute to Aura. That’s a shame, since the Blitz app offers per-LED color settings that are unavailable in Aura.

We’re comparing Delta Tuf Gaming RGB DDR4-3200 C16 to pricier CAS 14 kits from G.Skill and Team Group, as well as a value-oriented Adata XPG Spectrix kit with similar timings to the Tuf Gaming RGB. The Maximus XI Hero from Asus hosts our Core i9-9900K at a fixed 4.80GHz frequency, and a GTX 1080 from MSI complements our 256GB OCZ RD400 SSD  to minimize other bottlenecks.

The two CAS 16 kits, Delta Tuf Gaming RGB and XPG Spectrix D41, were also the two kits that didn’t reach DDR4-4000 for our latency optimization tests. Both kits would run their stock DDR4-3200 timings at DDR4-3466 however, and we did see performance improve as a result.

Team Group gave its Delta Tuf Gaming RGB the short end on overclocking, with the kit reaching a mere DDR4-3570 in our tests. Then again, most people use XMP defaults, anyway.

The Adata kit had marginal wins over the Delta Tuf Gaming in F1 2015 at both XMP and custom DDR4-3466 settings, but the pricier C14 kits proved why they cost extra.

The Tuf Gaming RGB also finishes last in 7-Zip, but again the tiny losses should be considered against its low price.

Our Basic Value chart is called “basic” because it only compares performance to price. The Trident-Z Royal kit for example has aesthetic features that push its price beyond its performance segment. And while the Nighthawk Legend hits its segment perfectly, the price difference for lower-latency DDR4-3200 is still larger than its overall performance advantage. When it comes to value, the Delta Tuf Gaming RGB Wins.

After being confused by Team Group’s DDR4 performance disadvantage throughout last year’s evaluations, we finally figured out that it was our change in motherboard vendor that caused the issue. Further tests showed that only Asus boards are optimized for Team Group memory, and today’s Asus TUF Gaming Alliance edition modules follow that same trend.

We added a set of Corsair DDR4-3200 C16 to further illustrate that performance problems on MSI, Gigabyte, and ASRock boards are primarily a Team Group issue.  Of all the other brands of memory that aren’t shown in the above charts (including Crucial, Kingston, and Patriot), the only memory that had a similar deficiency on non-Asus boards was Gigabyte’s Aorus kit.