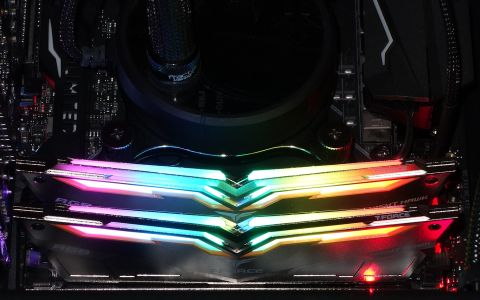 Team Group makes some great memory so we were a little shocked to find devastatingly-bad performance for its XCalibur RGB in our most memory-dependent benchmarks,  F1 2015 and 7-Zip. So shocked that we tossed some G.Skill and Adata memory on the same platform to make sure there was nothing wrong with its configuration. So shocked that we even tossed the XCalibur DIMMs on our next Motherboard Review sample, an ASRock model, to confirm there was nothing wrong with our MSI test mule. The performance improvement on the new board was far too slight to overcome this memory’s enormous deficit when compared to other modules, so we moved on.

The next set of odd results came from Gigabyte’s Aorus RGB Memory. Composed of two DDR4-3200 DIMMs and two “Demo Modules”, we included a set of Adata’s DDR4-3200 C16 modules in the charts simply to prove that the Gigabyte sample’s poor performance could not be directly attributed to its 16-18-18 timings. Behind the scenes we were already investigating such items as tRFC and tREFI but simply could not find a set of timings that would overcome its performance deficit. Assuming that Gigabyte was testing the modules on a Gigabyte board, we even tried one, only to find that any miniscule performance improvements were too inconsistent to attribute those performance problems to the original test platform.  And so we moved on, later noting that Gigabyte never gave us the name of its DIMM supplier…

That bit of history brings us to today’s test subject, the T-Force Night Hawk Legend DDR4-3200. Keen readers will note that these modules launched in time to cover the entire Christmas buying season, yet our initial findings were never published. Putting the above-mentioned history in the past, we looked anew at the new modules, only to encounter past problems that put these firmly into a 2/5 rating. So, we contacted Team Group and MSI to find out what could be done, only to find no real answers. We searched the net to find out if anyone else was having performance issues with their modern Team Group module on MSI boards…only to find that owners of these combinations were oblivious to their own performance issues. In fact, they all seemed quite pleased with the lower performance, likely because they’d never compared their systems to others while using any of the impacted software.

Details include an RGB light strip and two DDR4-3200 DIMMs with respectable 14-14-14-31 timings, encased in extremely heavy chrome-plated copper heat spreaders that push the weight of each module to 4oz (113g). The highest configuration for non-XMP boards is DDR4-2400 C16.

Our initial comparison included the three DDR4-3200 RGB memory samples we had on hand, plus the problematic XCalibur RGB DDR4-3600, to show that performance problems were not limited to the new Night Hawk kit.

The first indicator of problems was that while the Night Hawk Legend would run at its rated timings when using automatic voltage on our board, the board’s automatic “1.35V” setting produced 1.376V. Most motherboard brands sneak in some extra voltage when using XMP, but the Night Hawk modules required it. Manually adjusting our motherboard down to just over 1.35V caused errors at its XMP data rate and timings, and the best stable DDR4-3200 timings it could use at the corrected voltage were 14-15-15. On the other hand, the kit still surpassed the comparison modules with tighter timings at DDR4-3733 and DDR4-2666, so we weren’t without hope as we ran through our initial benchmark set.

Our original write-up detailed the slight performance differences in the control benchmarks and the extreme differences in the memory-bottlenecked examples and pointed to the latter as the reason for the Night Hawk Legend RGB’s poor value score. And then something wonderful happened: Asus sent us one of the boards on Team Group’s short list. Onward to page two!

Next Page Picking Up The Pieces
Be In the Know