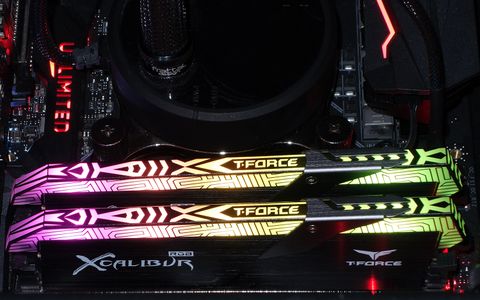 While the XCalibur RGB DDR4-3600 may work better on a different motherboard, loose factory timings add further credibility to this kit having a module problem, rather than a motherboard firmware problem.

Team Group enters the RGB fray with arguably the best-looking light diffusers available, separating itself from competitors who have either too much diffusion (resulting pastel colors) or none at all (which creates uneven lighting) to grab the attention of glass-paneled system builders. But while this kit's DDR4-3600 rating and $234 price appears to offer customers the best combination of performance-to-price and aesthetics, our tests revealed key problems that keep it off our buy-list.

Packed with a warranty and installation guide, as well as a T-Force case badge, the XCalibur RGB kit (part number TF6D416G3600HC18EDC01) has DIMMs decorated with black-anodized heat spreaders, grid-pattern light diffusers, and contrasting grey-anodized clips. Team Group rates the DRAM integrated circuits (ICs) beneath these parts at DDR4-3600 with 18-20-20-44 timings.

The extremely lengthy timings confused us a little, since its IC’s are supposed to be the same parts used in our own DDR4-3866 motherboard test kit (from G.Skill) as well as Adata’s DDR4-4600. A look under CPU-Z did nothing to improve our understanding of the slow tRCD/tRP/tRAS settings, though it did show that users whose motherboards don’t support XMP will at least get DDR4-2400 defaults. As an overclocking profile, XMP mode uses the same overclocking voltage as most other brands (1.35V) to keep these modules stable at their rated DDR4-3600. As overclockers ourselves, we’re going to chase tighter timings in our tests.

The XCalibur RGB's lighting contrasts exceptionally with the anodized parts and black grid pattern to provide visibly deeper hues than most of its rivals. As with other kits, you get an unsynchronized rainbow pattern by default that becomes even less congruent as the system runs. But we found that MSI’s Mystic Light LED software did a good job of both setting the colors and keeping them matched. Still in beta, Team Group’s Blitz software caused its module lighting to either flicker or lock up, depending on the set mode. So you'll want to stick with motherboard-based controls, at least until Team Group works out the kinks. Compatible alternatives include ASRock Polychrome, Asus Aura, and Gigabyte RGB Fusion.

Teamgroup’s biggest challenge will come from the Patriot's Viper RGB DDR4-3600, a set that has both better default timings and enough performance to have already garnered our Editor's Choice award. By rating alone, the beautiful XPG Spectrix D80 looks likely to generate middling performance despite its high price.

The great news is that all three of the tested kits overclocked to at least DDR4-4000. But what's not evident from our table is that the extra time and effort we had to spend getting XCalibur RGB kit to that speed. Our motherboard wouldn’t boot the T-Force sticks when using manual configurations until we picked one of its “Memory Try It!” presets, and then re-configured it to our desired settings. As for our hopes of tightened tRCD/tRP/tRAS through manual configuration, the quickest stable settings at DDR4-3200 and 2666 were worse than expected.

The SiSoft Sandra Memory Bandwidth test transfers packets sequentially, so that looser timings impact this metric as well as its Memory Latency test. The competing modules are quicker here.

At first, we thought that something must be wrong with our F1 2015 test, so we retested other modules and found that the board’s automatic configuration for secondary and tertiary timings were holding the XCalibur RGB back by more than its deficit in primary timings would indicate. After spending an extra day attempting to make the modules operate faster, our recommendation goes to Team Group to work more closely with motherboard brands on performance development, rather than insisting that users should spend even more time tweaking.

Concerning the XCalibur RGB, we also haven’t seen 7-Zip performance this bad on an overclocked Coffee Lake processor in a while.

Patriot’s Viper RGB was awarded for both its performance and value, since it's cheapest 16GB DDR4-3600 RGB kit we've tested, and also the fastest. That combination of performance and price prompted us to mostly ignore that its white light diffusers make most of its colors look a little pastel and faded. This is an area where the T-Force XCalubur RGB shines--both literally and figuratively--though the XPG Spectrix D80 had similar panache. The hard hit comes from the Spectrix D80 tying the XCalibur RGB in value, even though it costs around 10% more, by performing 10% better. Ten percent performance differences at the same data rate just don’t happen on Intel platforms. Or at least they didn't in our experience, until now.

T-Force's XCalibur RGB puts buyers in the precarious situation of giving up performance to save money compared to the XPG Spectrix D80, or stepping down to diminished RGB lighting effects to get better performance and price in the Viper RGB. That said, either of those choices appear more appropriate to us than paying for the XCalibur RGB's sub-par performance, no matter how sweet the RGBs look.