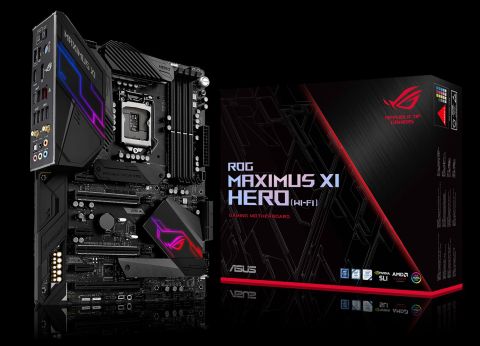 The Asus ROG Maximus XI Hero competes well against Gigabyte’s closest competing model, and that’s enough to get it the same point score. Fans of both brands can make their choice based on feature differences, while value seekers look can look for even better deals.

The $290 (£260) ROG Maximus XI Hero’s price competes directly against feature-packed boards such as the 10GbE-equipped Taichi Ultimate and Firewire 3-equipped Designare, but its own feature set resembles those of boards costing around 10 percent less.  It overclocks slightly better than several of those rivals, and faces only the same level of pricing criticism as previously reserved for Gigabyte’s Z390 Aorus Master. Buyers who swear by Asus and Gigabyte can decide between these based on features alone, while those without a brand preference can find a better bargain elsewhere.

Dial it up to eleven and back by four, but don’t dare call the Maximus XI Hero a mere seven: The fourth-from-top model in Asus’s highest-end Republic Of Gamers series is still a Maximus, even though it has fewer features than its siblings. We still get for example a pair of PCIe x16 slots that support SLI in x8/x8 mode, along with voltage regulator refinements and firmware advancements to aid in the all-important task of overclocking. Oh, and M.2 SSD heat spreaders: We get two of those, too.

The I/O section looks fairly typical among Z390 gaming boards, its 1.73Gb/s Wi-Fi coming from Intel’s 9560 CNVi PHY that interfaces the Z390 PCH’s integrated controller, its Gigabit Ethernet from Intel’s i219V PHY, its four USB 3.1 Gen2 ports (including the one Type-C) fed by the integrated controller, along with two Gen1 and two USB 2.0 Ports for a keyboard and mouse. The DisplayPort is still version 1.2, the HDMI output is still version 1.4b (4K at 30Hz), and the only Asus feature being its USB BIOS Flashback button. That last feature allows users to upgrade firmware to support a newer CPU or DRAM without requiring them to have an old one on-hand to use during the update process.

Power and Reset buttons are placed in the upper-front corner so they’ll still be useful when the board is mounted in a case…just in case you didn’t connect the case’s power and reset buttons properly. The Maximus XI Hero also has a status code display with a row of CPU/DRAM/VGA/Boot initialization indicator LEDs beneath it, eight 4-pin fan headers, two RGB LED headers, and two Addressable LED (aka Digital LED strip) headers.

If eight 4-pin fans aren’t enough for you, four more can be connected to an Asus Fan Extension Card, for which the 5-pin header can be found at the center of the Maximus XI Hero’s bottom edge. To its left are an Asus Retry button, MemOK II switch, TPM header, the second RGB LED and D-LED header, and front-panel audio. Front-panel USB 3.0, Asus Node, two USB 2.0, four-pin fan, beep-code speaker, and an Intel-standard front-panel button/LED group headers are to the right of the fan extension card header, and you’ll even notice a 3-pin fan header a little higher on the front edge.

Asus calls its three-pin fan header the Water Flow header, since it controls pump speed in response to readings from the two water flow sensor headers above it. As for the Retry button, it’s useful for overclocked systems that can only boot sometimes, since it doesn’t interfere with firmware settings. Enabled by default, the MemOK II switch tells the board that it’s OK to reboot at lower DRAM settings if a memory error is detected. Meanwhile, the Asus Node header allows agreeable third parties to develop specialized accessories to interact directly with firmware.

A new voltage regulator with ten MOSFETs and ten chokes sends power through eight of those “phases” to CPU cores, and without getting too far into the weeds concerning the design, offers at least 360A to CPU cores. Other points of interest include a USB 3.1 Gen2 front-panel header next to the 24-pin power connector, and a USB 3.0 port that, by being on the bottom edge, would preclude the installation of most graphics cards into the bottom slot whenever the front-panel cable is connected. We’re not too concerned about people using that slot for high-end graphics cards though, since it has only two PCH lanes by default and can only be pushed up to four PCH lanes by manually switching off two SATA ports in firmware.

With no other concerns about mounting space when using x16 or x1 expansion cards, we would like to note that the Maximus XI Hero’s open-ended x1 slots could encourage some users to load it up will all sorts of devices, and that there are some caveats in doing so. We pulled out a PCIe x16 single-slot graphics card to find that installing it into the top x1 slot requires the removal of the nearby M.2 heat spreader, but that the card’s connector clears an M.2 drive. Adding it to the second x1 slot forces its connector to rest between the two rows of pins of an undefined mini header that’s adjacent to the RTC battery, and we’re not sure if that could be a problem. The lower M.2 slot’s hardware prevents anything longer than an x8 card from being installed in the third open-ended PCIe x1 slot.