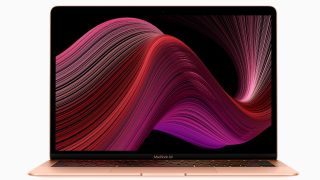 When Apple revealed its new MacBook Air, it said it updated it with a new keyboard, additional storage and Intel's 10th Gen Core processors. It didn't offer many details about those CPUs, but based on their LPDDR4X RAM support and Iris Plus graphics, we deduced that the chips are part of the Ice Lake family.

Now, newly discovered Geekbench results point to MacBook Airs equipping the Intel Core i3-1000NG4 and Intel Core i5-1030NG7.  There don't appear to be any results for the i7 model, but Apple has an i7 configuration listed, so it stands to reason that Apple would use the Intel Core i7-1060NG7

Intel's official comparison of these chips reveals a few differences between the "N" model processors and their N-less counterparts. The i5-1030G7's base clock speed is 800 MHz, for example, while the i5-1030NG7's is 1.1 GHz. The two chips also have smaller package sizes but slightly higher TDPs than their predecessors.

The new MacBook Air is available now from Apple's website starting at $999 . Orders are expected to arrive between March 31 and April 7 in the U.S.