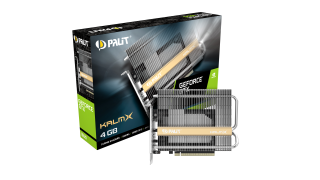 If it's silence that you're after above all else, you may be interested in Palit's latest GT 1650 KalmX graphics card. This GPU comes with a huge passive heatsink, and while that means it won't be quite as happy to stay in boost as much as actively cooled cards, it does mean it'll be whisper quiet. No, actually, it'll be even quieter than whisper-quiet -- so quiet that you'll probably be able to hear the coil whine if you're in a quiet room.

Thankfully, the card doesn't have a very high TDP and is able to draw its maximum of 75W straight from the motherboard slot without the need for a PCI-Express power cable. Clock speeds sit at a base clock of 1485 MHz with a boost clock of 1665 MHz. That's the standard boost clock for reference Nvidia GTX 1650 cards, though how much the card will be able to hit that will depend strongly on the kind of case it's running in, how much airflow is provided from external sources, and the card's orientation.

The cooler uses two nickel-plated heatpipes which draw heat from a copper base, leading to the large fin stack. The cooler also covers the VRM and memory, so there is no need to worry about those overheating. Despite being quite big though, the cooler does fit within the two-slot profile, though we strongly recommend you keep the third adjacent slot empty for airflow purposes.

Memory sits at the standard 4 GB of GDDR5, which runs over a 128-bit memory interface at 8 GB/s to generate a memory bandwidth of 128 GB/s.

There's no word on pricing or availability just yet.