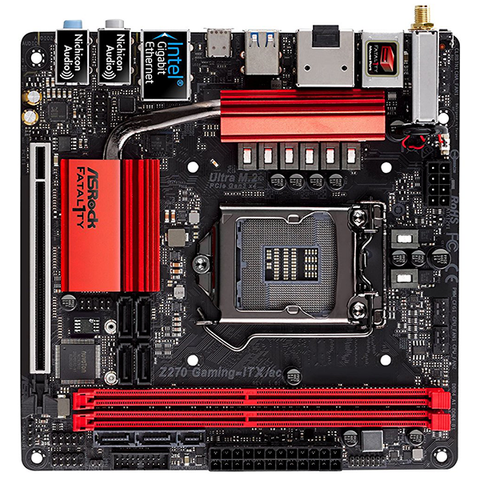 MSI offers a little more overclocking flexibility via higher voltage maximums, yet our own settings are designed to preserve a single processor sample throughout the entire review series. Moreover, the Z270 Gaming ITX/ac’s smaller voltage regulator doesn’t have the capacity to feed the processor under difficult software loads when using higher voltage levels, so higher adjustments wouldn’t be very helpful.

Boring benchmark results are a great indication that everyone is doing things right, since big advantages can only be had by overclocking. Speaking of which, today’s boards all have tiny BCLK O/Cs of 24 to 85 KHz, with ASRock being the larger offender.

Intel’s Kaby Lake memory controller (as well as the Skylake it was based on) performs noticeably better when using four ranks of memory, yet our test set is single rank. Meanwhile, the Z270 Gaming-ITX/ac has only two slots, while the larger boards have four. Thus, the ITX board was the only one tested with two ranks installed rather than four. While we could have switched modules to get four ranks from two slots, doing so would have spoiled the comparison by altering both memory timings and overclocking capability.

The Z270 Gaming-ITX/ac comes up just a little short in the Ocean Surface (FFT) test of Compubench, though that could be due to its use of two rather than four memory banks. Fortunately, this test isn’t among the real-world benchmarks used in our performance-to-price evaluation.

We expected a slight dip in F1 2015 performance for the Z270 Gaming-ITX/ac’s use of two single-rank DIMMs, yet this apparently isn’t so much of a problem at the low DDR4-2133 defaults used in our basic benchmarking tests.

The Z270 Gaming-ITX/ac has a strong showing in our Talos benchmark, where the competing Z270 Gaming M5 falters due to an issue with its included Nahimic Audio application.

The two MSI motherboards also finish our After Effects workload more quickly compared to ASRock samples. The only clue revealed in our synthetic apps was MSI’s slightly superior memory performance.

We didn’t have anything plugged into the Thunderbolt 3 port of the Z270 Gaming-ITX/ac, and its ability to shut off when not in use prevented any noticeable impact in power consumption. Prime95 power consumption is also lower for the smaller, simpler board.

A performance advantage of only 0.1% over the average of all previously-tested Z270 motherboards isn’t much to write home about, but combining that with 12.3% below average power consumption puts the Z270 Gaming-ITX/ac far ahead in overall efficiency.

One thing not yet mentioned about Z270 Gaming-ITX/ac CPU overclocking is that the 46x multiplier always drops to 44x under load, and that the only way to get 4.6 GHz under load was to use a lower multiplier and higher BCLK. This behavior only affected 44x, 45x, and 46x multipliers in our test, and we were still able to hit 4.6 GHz without losing stability using the alternative BCLK. The bad news for ASRock is that this is a 4.8-GHz-capable CPU. At least the memory O/C was good.

Prev Page Software, Firmware & Overclocking Next Page Final Analysis
7 Comments Comment from the forums
Be In the Know