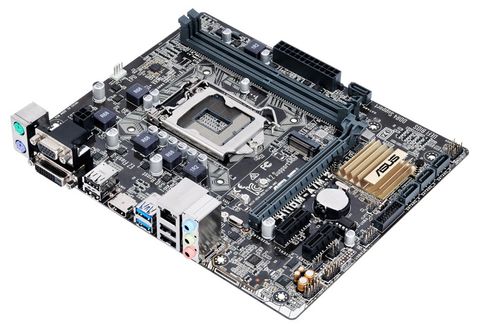 If the general shortcomings of H110, or those specific to Asus’ H110M-A M.2 are not a problem for you, choosing this board will serve you well. In all fairness, most of those shortcomings will be true of any manufacturer's H110 board. It has a few more features than the sparsest of them though, and is likely built a little better too.

Every so often, after a few motherboard reviews in a given sub-category, forum members will wonder in the comments about the lack of Asus subjects in the review mix. The company has chosen not to submit review samples in the motherboard category. From time to time then, we'll actually buy a board to review. Today, we're taking a look at an inexpensive mainstream Asus board to answer some community requests.

As the review unfolds, we think it will have generated a useful data point or two. Might Asus begin submitting boards? I believe I’ve been fair, so we shall see.

Feature-wise, the H110M-A M.2 looks very similar to a similarly-priced competitor, but there are some differences. Most notably, today’s sample offers no diagnostic display or LEDs. Not shown on the table, it does offer an LED-illuminated border along the audio area. Unlike the cheapest competitor, this board also offers a M.2 slot, at PCI2.0 x4 speed. It has the fewest power phases of any of them, however.

In the box, you get the board, I/O plate, a pair of SATA cables, screw for the M.2, driver CD, and a rather thin 5-1/2”x8-1/4” manual. It is thin, because English is the only language offered. The type is not too tiny, and may be needed, because although there is silk-screening on the board (e.g. for the front panel connectors), my older eyes struggled to make it out, and I did not find the speaker polarity clearly marked.

As mentioned above, there is no diagnostic display or LEDs.

The codec is the ALC887, an upper-mainstream part, with 90dB S/N on the input, and 97dB S/N on the output. In conjunction with the front panel’s speaker port, it does support 7.1 sound. Asus claims separate layers for the audio, and Japanese capacitors for higher quality; the speakers on my test bench are not up to determining any real difference. Intel’s I219-V is the gigabit LAN controller.

The board layout has a couple of differences from what we're used to seeing, but nothing dramatic. Beginning on the left rear and going counter-clockwise, the audio section is bordered with an LED strip that can be steady, off, or breathing. The front panel audio is on the left edge. In front of that are the COM1 and SPDIF headers, then a 2x3-pin block set back from the edge that is not labeled nor identified in the manual.

The USB 2.0 header is next, followed by the USB 3.0 header. Behind that is the CLRTC header, with no jumper block. Next are three of the four SATA 6Gb/s ports. And finally, in the front corner are the front panel and speaker headers; the former is silk-screened.

It’s over a third of the way along the front before the last (actually SATA6G_1) SATA port appears. The ATX power connector is to its right. There is nothing else along the front, and the only two features on the right are the CPU_FAN header in (approximately) the middle, and the 4-pin CPU power cable set back a little from the edge. There is sufficient finger space between it and the rear panel connectors.

The M.2 slot is between the CPU and the PCIe 3.0x16 slot. This slot has a “whale-tail” slot lever, which we like, but the two RAM slots in front of the CPU only have latches on the right side. A double-width graphics card will overlap the battery, which isn’t a big deal, but it also overlaps one of the PCIe 2.0x1 slots, making it useless. If you have a double-slot card, and a PCIe wireless LAN adapter, and a tuner card or FAX modem, this isn’t the board for you. The CHA_FAN header is at about 11:00 o'clock from the CPU socket.

Despite the sparse 3+1 power phases, the QVL for this board includes 91W CPUs, including the i7-7700K; be aware that a BIOS update may be needed for Kaby Lake.