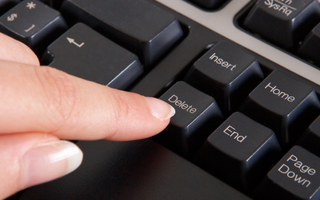 Windows or Linux may be your operating system of choice, but no matter which platform you choose, your computer's BIOS (Basic Input / Output System) is calling all the shots behind the scenes. The BIOS, sometimes referred to as UEFI firmware on newer computers, tells your PC what storage drives you have and which one to boot from and what components you have, among other key functions. To change your boot order, set a system password, disable ports or built-in peripherals, or even to overclock, you may need to go into the BIOS menus.

There are a few different ways to access the BIOS menus on a PC:

Method 1: Use a BIOS Key

When you first power-on a computer, it goes through a very quick POST (power on self test). If you can hit the correct hotkey before the POST is completed (or hold it down as you hit the power button), you will get into the BIOS menu. However, some computers go through POST so fast that they don't recognize input from the keyboard in time for you to a hit key. For those, skip to method #2 below.

Annoyingly, different PC brands use different BIOS keys. Most modern motherboards use the DEL key, but laptops and desktops are less consistent. For example, hitting F2 might work on an Asus, you'll need F10 on an Acer computer.

If you don't know the hotkey for your computer, you can look and see if a message comes up during POST, telling you what key to press or you can try hitting one of the 12 function keys, the DEL key, the Enter key or the ESC key since it is always one of those. You may have to try a few times to determine which one it is. In our research, DEL and F2 were, by far, the most common.

Here's a list of common BIOS keys by brand. Depending on the age of your model, the key may be different.

Unfortunately, some computers go through POST so quickly that there's no time to hit a key. Some desktops won't even recognize input from a USB keyboard until after POST is completed (though they will see input from an old PS2-style keyboard). If you can't use a BIOS key and you have Windows 10, you can use the "Advanced startup" feature to get there.

3. Select Recovery in the left pane.

Your computer will reboot.

Method 3: Use a Linux Command

If you're running a modern version of Linux such as Ubuntu, you may be able to get to the BIOS by typing "sudo systemctl reboot --firmware" at the command prompt.

What if you can't boot your OS or hit a BIOS key?

If your computer can't load an operating system, because it doesn't detect a bootable drive, it will usually pause, beep and give you the option to enter the BIOS, which it will often call "setup."

However, the biggest problems occur when the system POSTs too fast for you to hit a key and then Windows or Linux tries to boot and fails. I've had this problem when I had a missing or corrupted bootloader, I got the Windows splash screen and then a blue screen of death.

To force the BIOS to appear under these circumstances, you can try using an emergency boot disk, provided that you can either select a boot device at startup or your computer has set an external USB drive as a higher boot priority than its internal storage drive(s).

You can use a Windows 10 install disk as an emergency boot disk. Once the USB boots, you need to click "Repair your computer" instead of install and then click Troubleshoot -> UEFI Firmware Settings -> Restart.

Finally, if you can't boot off of an emergency disk, you can try to cause a system halting error that would prevent your computer from attempting to boot off of its internal drives. Then, you'll be given the option to enter the BIOS menu.

Many desktop computers will give an error message if there's no keyboard plugged in (if you need help finding one, check our out Best Gaming Keyboards list) or if the keyboard buffer is overloaded from holding down too many keys at start. Pulling out your primary internal storage drive would also cause an error that would let you into the BIOS, but if that drive has a non-booting OS on it, your problems might resume once you plug it back in.

Whatever method you use to access your BIOS, be careful when making changes to your settings there. You could end up disabling key components.