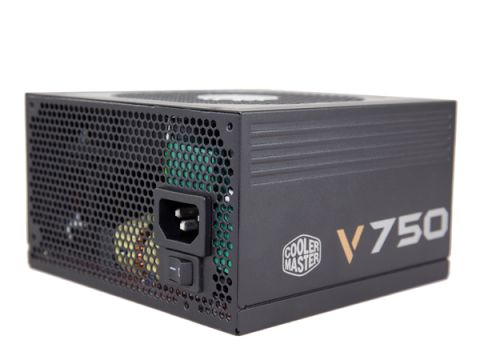 The new Cooler Master V750 is one of the smallest, fully modular PSUs with 750W capacity available on the market today, featuring good overall performance and silent operation under normal operating conditions.

Cooler Master sells three high-end, fully modular V-series power supplies made by Seasonic and three semi-modular V(SM) models that are manufactured by Enhance Electronics. Apparently, the company wanted to enrich its high-end line with lower-capacity units, so it introduced the V550, V650 and V750 with up to 550W, 650W and 750W output, respectively. These new PSUs are based on a similar platform as the VSM units. However, they employ fully modular cabling and incorporate a higher quality Loop Dynamic Bearing fan.

There is currently a shortage of options when it comes to compact PSUs with enough power to feed a high-end gaming system. The most active company in this segment is SilverStone. In a recent review, we evaluated the ST75F-GS V2, which is among the smallest 750W units available at only 14cm deep. Today we have the opportunity to review a challenger from Cooler Master sporting the exact same dimensions. It also shares other attributes, including an 80 PLUS Gold rating and modular cabling.

Cooler Master entrusts manufacturing to its favorite OEM, Enhance Electronics. Unlike this model's predecessor, the VSM750, 3D circuit design is used to facilitate higher efficiency, leading to less waste heat. And because we've tested the VSM750, we can compare both units' efficiency, especially under light loads.

Besides its 80 PLUS Gold certification and modular cabling, the V750 also features a full set of protection capabilities. This OEM is among the few that offers OTP (over-temperature protection) to most of its platforms, enabling what we consider to be one of the most important protections for a PSU. Unfortunately, a relative low temperature rating for max power delivery isn't as high as we'd like to see. Enhance instead chooses to be conservative, possibly due to increased noise output at higher ambient temperatures.

As far as cooling goes, the most notable difference between the VSM750 and V750 is the latter's Loop Dynamic Bearing fan, which offers a significantly longer useful life than the plain ball-bearing fan utilized by the older model.

Finally, the dimensions of this unit are similar to its predecessor. The V750 is tied for the title of smallest 750W PSU with SilverStone's ST75F-GS V2.

The minor rails are strong enough for today's needs. As you can see in the above table, the 5V rail is rated for slightly less current than the 3.3 rail. More than 20A on the 5V rail is already overkill for a modern system, though.

On the other hand, the very important +12V rail can deliver the unit's full power on its own, while the 5VSB rail has the typical amperage for a modern PSU. We would like to see a little beefier 5VSB rail, although 2.5A will do the job just fine in most cases.

There are enough cables to deliver this unit's full power efficiently. In total, the V750 has four PCIe connectors along with a couple of EPS ones, all of which are available at the same time. In addition, the number of SATA and peripheral connectors is sufficient, and there is also a single FDD connector for the components that still use it.

Cable length is a little bit short overall, and we would like to see longer ATX and EPS leads. However, given the small dimensions of this unit, you could argue that it'll likely be installed into small enclosures where long cables can create problems. The distance between the SATA connectors is optimal, while the four-pin Molex connectors should be a little farther from each other in our opinion. Finally, all connectors use 18-gauge wiring, satisfying the ATX spec's recommendation.

Next Page Packaging, Contents, Exterior And Cabling
7 Comments Comment from the forums
Be In the Know