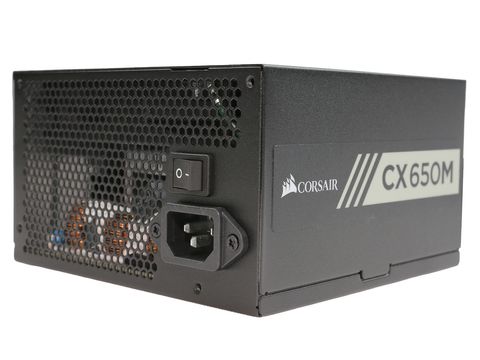 The box is pretty small. On its front is a picture of the PSU with its modular panel shown, along with the pair of native cables. The model number is highlighted inside a yellow frame and a couple of icons depict the 80 PLUS Bronze rating. On one of the two sides, Corsair lists the most important features, including 80 PLUS Bronze efficiency, the variable-speed fan, and the continuous power output. Of course, the temperature-controlled fan speed and continuous power output are common modern PSUs. Looks like Corsair's marketing team was out of ideas and didn't have anything catchy to write on this side of the box.

Up top, a graphical list depicts the available cables/connectors, including cable length. Finally, around back, two graphs depict the efficiency and fan noise curves, along with the power specifications table and a diagram showing the unit's dimensions.

The CX650M is only protected by bubble-wrap inside its box. We would like to see better protection, since shipping conditions aren't always ideal. Corsair's bundle includes a warranty leaflet and a user's manual, a set of fixing bolts, several zip-ties, and an AC power cord.

In this price range we don't expect killer looks or a high-quality finish. The external design is plain and the finish is decent, given the CX650M's affordable price. Up front, the small power switch is installed above the AC socket with the cooling fan facing upwards.

Two stickers on the sides indicate the CX650M's model number, while a larger one on the bottom depicts the power specifications table, along with all conformity markings. For example the CE marking is a requirement for certain products that are destined for the EU market. In the U.S., the corresponding electronic devices should carry the FCC marking. The yellow Hi-Pot (High Potential) sticker verifies that the electrical insulation is high enough to protect users from electrical shorts (under normal operation conditions at least).

The small modular panel includes just five sockets. This is a mainstream, mid-capacity PSU, so you shouldn't expect a ton of available cables/connectors. Nonetheless, the CX650M is equipped with enough of them to satisfy folks covered by its capacity.

The PSU's footprint is pretty small, thanks to its reduced depth of 14 cm. The fan isn't centered, which looks kinds of strange. However, we believe that Corsair installed it this way to increase the airflow in areas that matter most.

Although the CX650M is an affordable product, all of its cables use darkened wires. The native ones are even fully sleeved back into the chassis. In addition, all modular cables are flat. This is an advantage, since we prefer flat cables over round ones; they block less airflow inside the enclosure when they're routed properly.