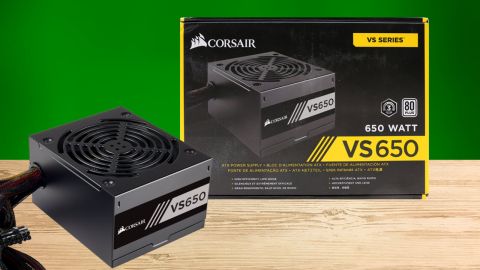 The load regulation is nothing to write home about. We didn't expect for more in this section, given the outdated design of this platform.

The hold-up time is lower than 16ms but the power-ok signal is accurate and this is important, because it doesn't provide fake information to the mainboard and the rest components, so it doesn't expose them to dangerously low voltage rails.

The pair of NTC thermistors does a good job, keeping the inrush currents at normal levels.

We chose not to go close to 45°C, as we usually do, since the VS650 is only rated up to 30°C. Nonetheless, even with 41.4°C it survived test #11 with 110% of its max-rated-output load. This shows that Corsair used parts that can take some abuse without complaining (or exploding).

The fan profile gets aggressive once the ambient temperature climbs, but this is natural since this unit's efficiency is low so the thermal loads at its internals are high. The good thing is though that under light loads the fan spins at low speeds, keeping the noise equally low.

In the following tests, we measure the Corsair VS650's efficiency at loads significantly lower than 10 percent of its maximum capacity (the lowest load the 80 PLUS standard measures). This is important for representing when a PC is idle, with power-saving features turned on.

Under light loads the efficiency levels are satisfying, for a vanilla 80 PLUS and ETA-S certified unit, while the fan spins at very low speeds with the noise output staying within 15-17 dB(A).

Next, we plotted a chart showing the Corsair VS650’s efficiency at low loads, and loads from 10 to 110 percent of its maximum-rated capacity. The higher a PSU’s efficiency the less energy goes wasted leading to a reduced carbon footprint, besides lower electricity bills.

With normal loads the unit scores last, but with light loads, it manages to take the lead from the EVGA 650 BQ. Definitely not impressive performance, but you should keep in mind that it is the most affordable of all.

The 5VSB rail achieves high efficiency levels. This is a nice surprise!

Power Consumption In Idle and Standby

The fan's noise is kept low under lighter loads (<280W) even under high operating temperatures. With higher loads naturally the fan control circuit has to increase the airflow to remove the heat out of the PSU's internals. If the platform's efficiency was higher, the thermal loads would be lower, so the fan wouldn't have to spin at high speeds.