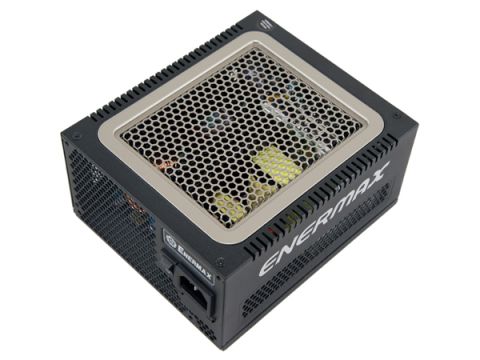 For an in-depth look at our PSU testing and methodology, please check out How We Test Power Supply Units.

In the following screenshot, the blue line is the mains signal and the yellow line is the Power Good signal. The latter is de-asserted to a low state when any of the +12V, 5V or 3.3V output voltages fall below the under-voltage threshold, or after the mains power has been removed for a sufficiently long time to guarantee that the PSU cannot operate anymore.

The hold-up time is significantly higher than the minimum time that the ATX spec sets. The increased capacity of the bulk cap helps make this happen.

Inrush current or switch-on surge refers to the maximum, instantaneous input current drawn by an electrical device when it is first turned on. Large inrush current can cause the tripping of circuit breakers and fuses, and may also damage switches, relays and bridge rectifiers. As a result, the lower the inrush current of a PSU, the better.

We conduct two additional tests. In the first metric, we stress the two minor rails (5V and 3.3V) with a high load while the load at +12V is only 0.10A. This test reveals whether the PSU is Haswell-ready or not. In the second test, we determine the maximum load the +12V rail can handle while the load on the minor rails was minimal.

As you can see from the temperature column, we pushed the PSU to its limits without regard for its passive design. With 45-degree C ambient temperature, air exiting the PSU's top exhaust grill measured almost 70 degrees C! This translates to a 25-degrees delta, which is huge. However, the unit still delivered its full power for prolonged periods of time without any problems. At 45 degrees, we encountered an issue only when we tried to apply full power from standby; the PSU shut down because one of its protections kicked in (most likely the OTP protection, since at lower than 40 degrees the PSU didn't show any symptoms of this problem). Because Enermax does state that 40 degrees C is the max temperature at which this unit can deliver its full power continuously, we won't subtract any performance points for this.

Load regulation was tight on all rails. However, we expected to see even better results since this is a digital platform. In the efficiency section, the PSU cleared the 80 PLUS Platinum requirement under full load with ease. It didn't pass the other two requirements at 20 and 50 percent of its max-rated-capacity load tests though. Then again, Ecova, the company behind the 80 PLUS program, tests at an unrealistic 23 degrees C. We perform our tests around 20 degrees C higher, so it is natural to measure lower efficiency readings since, as the operating temperature increases, efficiency decreases.

The readings from the ZDPMS are close to the actual test results, though we'd like to see better accuracy, especially in efficiency and voltage values. Either the program or the digital circuit needs some fine-tuning. Since we have seen digital PSUs with very accurate readings in the past, we believe that this can be fixed in the future. Nonetheless, the provided information of the ZDPMS software will satisfy the average user with results within two-percent accuracy.

Prev Page A Look Inside And Component Analysis Next Page Efficiency, Temperatures And Noise
22 Comments Comment from the forums
Be In the Know