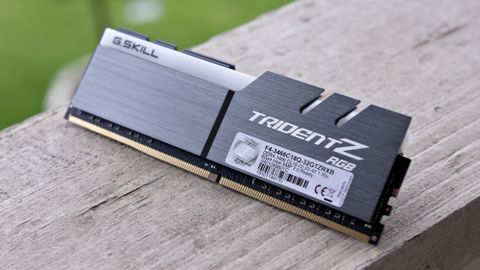 If you're after an RGB kit for a Threadripper build, this X399-focused G.Skill Trident-Z model is a solid performer. Although you may want to keep an eye out for a sale price.

I tend to focus on aspects that are important to builds, like regulator designs, board placement, and aesthetics. While waiting on the dust to settle with AMD's new X570 chipset and other Ryzen related releases, it's time to shift gears towards a more overlooked component: the memory.

Our memory reviews have for a long time been run on Intel-based test stands, so when G.Skill announced its F4-3466C16Q-32GTZR AMD kit, it was prime time to start shifting our focus more towards AMD-based memory performance. Having used its Flare-X 4x8GB kit for all our X399 motherboard coverage, it was only fair to throw this kit into that same test stand. Today, we're going to be putting up the RGB-clad DIMMs against its more-boring brother as well as a Corsair Dominator Platinum kit of similar data rates.

G.Skill's Trident-Z line is primarily focused on overclocking and providing top tier aesthetics at modest prices. Among the Trident-Z's, various color schemes are offered with comparative timings and data rates to cover a broad spectrum of builds and use cases. For our testing today, we're looking at the RGB line, which comes out of the box with a rainbow breathing pattern built into its DNA. For a more polished look, G.Skill offers up its Trident Z RGB Control software to manually adjust and sync the colors.

That said, we've encountered mixed results with this tool, and prefer Asus' Aura Sync, MSI's Mystic Light, or Gigabyte's RGB Fusion software to better sync the lighting schemes with your build. Gamers should note, though that some of this third-party software can cause problems with anti-cheat software with games (particularly Easy Anti-Cheat).

Beyond the RGBness, the heat spreaders on this kit are identical to other Trident-Z kits, and the brushed aluminum is a great shift from its more budget oriented Ripjaws or Fortis lineups. The more aggressive styling of the metal against the RGB-lit color bar provides a great contrast that looks stellar when installed in our quad-channel motherboard.

Let's dive into the guts of these DIMMs, the DRAM ICs (integrated circuits). Most forum threads applaud companies' use of Samsung B-Die ICs, but many don't appreciate the price premium with this proclaimed "Ryzen-DRAM standard." G.Skill's kits use a variety of DRAM, and this particular kit comes equipped with Hynix A-die ICs, laid out in a standard 1Rx8 configuration on the DIMM. With original SPD configured to DDR4-2133, we are forced out of the box to set XMP voltages and timings in order to get to our former test standard of DDR4-2400, whereas the lower-specced Flare-X DIMMs came programmed with industry-standard 2400 timings. Bumping up to the advertised DDR4-3466 data rate, we observe a CL18 configuration, with subsequent timings for 18-22-22-42-64-42-4-9 for CAS-RCD-RP-RAS-RC-FAW-RRDS-RRDL, respectively. For those interested in getting intimate with the Ryzen Memory Calculator tool, we've found this configuration to be ideal:

Testing today takes several pages out of our motherboard benchmark suite and trims it down to allow us to rapidly collect data at various memory speeds for these kits. Sandra will provide us with synthetic results, 7-zip, and Blender for application performance, and F1 2015 and Metro Last Light: Redux will provide our gaming metrics. For comparison today, we'll be testing at DDR4-2133, 2400, 2933, and each kit's XMP data rates.

As for our test bench, we're carrying over our X399 motherboard rig to do double duty here. Our tried-and-true Threadripper 1950X powers our quad-channel memory interface on top of an updated Asus X399 Zenith Extreme Alpha motherboard. This board review is in the works and we wanted to flush many memory kits through it as possible as we prep for future content on that platform. As for GPU, we are still rocking the EVGA GTX 1080 FTW3 and cooling our CPU with the 360mm S36 Celsius AIO from Fractal Design. The chassis of choice is our Corsair 570X crystal and our NVMe hard disk is still the RD400 from Toshiba.

Next Page Performance, Overclocking, and Conclusion
2 Comments Comment from the forums