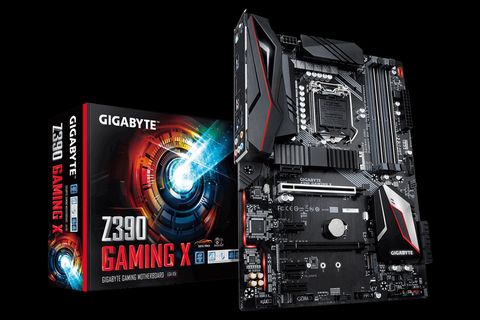 Gigabyte APP Center resides in the taskbar as an easy launch point for its applications, Windows settings, Gigabyte-installed third-part applications (Intel XTU), a menu for updating Gigabyte-installed software, and a menu for downloading/installing other Gigabyte-provided utilities. The purpose of most of its utilities is clearly explained in the title, and we found its Smart HUD overlay window the most interesting of these. Conversely, we couldn’t get its 3D OSD to display our chosen system status on the two games we tried (Ashes and Talos).

Also launched from APP Center, Gigabyte EasyTune provides a windows interface for overclocking. Its OC mode boosted our CPU core voltage by around 200mV, which caused it to overheat quickly when loaded with Prime95, and its Auto Tuning algorithm provided similar results. The available manual tuning menu is the way to go for the Core i9-9900K core: Memory frequency setting requires reboot, and memory timing bars are fixed.

Clicking the static icon in EasyTune brings up the Hardware Monitor bar of Gigabyte System Information Viewer, so that clicking on the return-arrow icon launches SIV rather than returning the user to EasyTune. The Hardware Monitor bar is vertically oriented on the screen’s right edge by default, but we split the  screenshot and put the halves side-by-side to make it fit the image window of this review.

Though it’s called System Information Viewer, Gigabyte’s SIV is primarily a fan control application that forces users to sit through a somewhat lengthy fan tuning test upon first run. After the process finishes, users are welcomed to make their own fan adjustments if desired. Following the intent of its name, the utility also provides hardware monitor logging.

Found under M.I.T.’s Advanced Frequency submenu, Enhanced Multi-Core Performance is supposed to force the CPU to use its maximum (single core) CPU boost ratio regardless of how many cores are loaded. That doesn’t work for the Core i9-9900K, which is why this is the first processor we’ve used in a long time that didn’t have forced overclocking enabled by default on any board. This menu also shows CPU base clock and ratio adjustments, including memory multiplier and even an XMP-enable setting. Additional CPU controls are found in its “Advanced CPU Core Settings” sub-submenu.

Our CPU overheats when fully overclocked and fully loaded beyond 1.30V, and we found that the best way to reach 1.30V under load was to set the board’s CPU VCore Loadline Calibration (Advanced Power menu) to “Turbo” and its core voltage to 1.275V. The Z390 Gaming X’s DRAM voltage was a little less finicky, producing a measured 1.348V at its 1.340V setting.

Other M.I.T. submenus include a very basic hardware monitor, an enhanced mode for a legacy benchmark, and a link to the same CPU fan menu that we mentioned at the top of this firmware coverage.