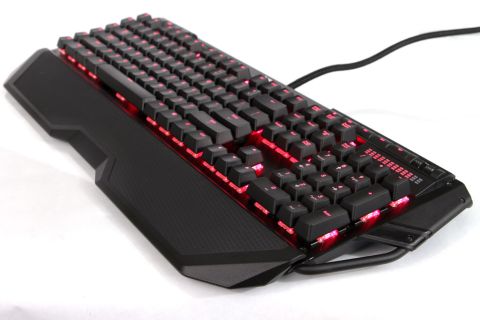 The G.Skill KM780 we have on hand employs Cherry MX RGB Brown switches, although as we mentioned earlier, you can get models with RGB Red, RGB Blue, Red, Brown, or Blue switches.

Cherry’s RGB switches have an LED mounted on the top of the switch housing, and a transparent casing is intended to allow the light to spill out liberally over the surface of a keyboard. In that regard, the KM780 shines, as it were. The lighting isn’t quite even, but given the placement of the LEDs, it’s about what one should expect.

The location of the LEDs causes one notable problem, though, in that secondary characters on key caps tend to be dimmer. This is common problem on keyboards, but the issue is sometimes more or less noticeable depending on the size and placement of the characters as well as the reflective properties of the top plate.

In the case of the KM780, secondary characters are significantly dimmer than the primary ones. The dedicated M buttons and media controls, though, enjoy exceptionally bright lighting.

The KM780’s key caps are mold-injection ABS plastic, and the keyboard also ships with 10 replacement key caps that are made of the same. The bonus caps are bright red in color and have horizontal grooves. The W, A, and D keys also have a sharp angle, ostensibly to provide a more emphatic feel for that oh-so-important cluster.

As usual, I’m of two minds about these funky key caps. On the one hand, they look and feel really cool. On the other hand, it’s striking (and not necessarily in a good way) when those familiar keys suddenly feel so different. I used them for a while and eventually adjusted to them, but only somewhat. They’re a solution for a problem that doesn’t exist. And forget about leaving them on if you use your keyboard for any typing; they completely wreck the typing experience. Thus, if you like the gaming caps but also use your keyboard for anything but gaming, you’ll have to switch them out before and after each session.