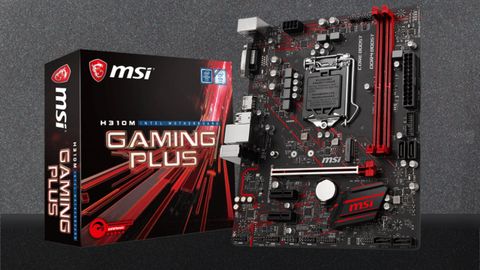 If you don’t plan to overclock and want to save some cash, MSI’s 310M Gaming Plus is a solid foundation for an Intel-based build on a budget.

MSI’s $75 / £68 Micro-ATX H310M Gaming Plus offers users a mostly well-equipped solution for those on a tight build budget who don’t not plan on overclocking. The company places this Intel board in its performance gaming lineup, which it says is built for hardcore gamers and PC enthusiasts so they can fully utilize Intel Coffee Lake 8-core processors.

While the marketing rhetoric attempts to make this sound like a premium motherboard, make no mistake: As it’s built around the entry-level H310 chipset, the H310M Gaming Plus is designed for gamers and builders opting for mainstream CPUs who would prefer to spend the majority of their money on other components, like the CPU, graphics, and storage.

The H310M Gaming Plus supports the latest 8th and 9th gen Intel Core, Pentium Gold, and Celeron processors with DDR4 memory support up to 32GB with speeds up to 2666 MHz (the speed limitation here is baked into the chipset). The Micro-ATX board includes a single M.2 slot and the full chipset complement of four SATA ports, along with an Intel-based Gigabit NIC rounding out some of the basic features.

Accessory stacks on the budget end typically come with just the basics needed to get the PC up and running, and the H310M Gaming Plus follows that trend. Below is a list of all included accessories.

The Gaming Plus motherboards from MSI typically run with a black and red theme and the H310M Gaming Plus is no different. The board features a black PCB with red lines meandering their way from the top, through the middle to the chipset and finally stopping at the end of the board by the audio section. Other red highlights on the board include the two DRAM slots, coloring on the chipset heatsink, as well as the line separating the audio bits from the rest of the motherboard. That audio line is the only aesthetic LED on this mode (red only, controlled through Mystic Light application). The board also does without VRM heatsinks or a shroud to cover the rear IO bits.

Overall, the H310M Gaming Plus looks like most others of this class: more simple and functional than pleasing to the eye. That’s of course in large part to keep costs in check. While the board is certainly not an eyesore, the black and red theme along with a lack of RGB LEDs can limit the ability to match with a build theme, since the colors cannot be changed. But given the price, the lack of RGB is pretty much expected.

Starting on top we can see the no-frills motherboard in its “naked” glory. Exposed is the top of the rear IO area along with the exposed VRMs. Sending power to the CPU is a single 8-pin EPS connector at the top. MSI lists the board as 7-phase and from the looks of things is split into 4+2+1 (CPU, SOC, Memory). MSI says this board will support up to six-core Coffee Lake CPUs, and it handled our 91W i3-8350K without issue. But don’t expect to drop in an eight-core i7 or an i9--not that we’d expect users to pair a $400-$500 CPU with a $75 board, but people have certainly attempted stranger things in the past.

Also located up top are the only two fan headers here, CPU_Fan1 and SYS_Fan1, which are able to control DC and PWM-type fans. I would like to have seen at least one other fan header on the board, as even with smaller Micro-ATX style cases, more than two fans are common--and plenty of cases come with two fans up front and an exhaust at the back.

To the right of those headers are the two red DRAM slots which lock in the memory with one side. The slots hold up to 32GB of ram with speeds up to 2666 Mhz. The board uses MSI’s DDR Boost topology, although it’s doubtful this helps much on a chipset where running past JEDEC speeds isn’t possible.

The far-right side of the board is where we find the 24-pin ATX connector and a front-panel USB 3.1 header, along with two of the four SATA ports. Last, in the upper-right is the EZ debug LED which lights up during the POST process. If there is an issue on POST with the CPU, DRAM, VGA, or boot drive, the LED will stay lit, helping narrow down possible issues.

On the bottom half of the board, the left side houses Realtek ALC887 chip along with the Chemicon audio caps. We can see the line separating the audio bits from the rest of the board. The PCB also separates the left and right audio channels into different layers for improved sound quality, according to MSI.

The PCIe area consists of a single CPU-sourced full-length x16 slot covered in MSI’s Steel Armor reinforcement said to protect VGA cards against bending and EMI. Below that are two x1 size slots that get their bandwidth from the H310 chipset.

The single M.2 slot is located just above the full-length PCIe slot and supports up to 80mm (2080 size) M.2 modules. The slot supports full-speed SATA (6Gbps) and PCIe 2.0 x4 speeds, which is effectively half the bandwidth of NVMe slots found on most pricier motherboards. This bandwidth limitation should limit only very fast PCIe 3.0 x4 NVMe drives, but know it can be a bottleneck if high-end NVMe based storage is your part list.

After skipping over the chipset heatsink, we find the other two SATA ports hanging out in the bottom-right corner in a vertical orientation, separated from the other two SATA ports a few inches above. If you need RAID capabilities, you’ll have to get an add-in-card (or just opt for a higher-end motherboard) since the H310 chipset does not support RAID natively.

Across the bottom are several headers, including additional USB headers, front panel audio, and an RGB LED header. The bullet points below list the headers from left to right.

On the business end of the motherboard, the rear IO area, are four USB 2.0 and two USB 3.1 Gen1 (USB 3.0) ports,a s well as the refuses-to-die PS/2 connector for that prehistoric keyboard and mouse. Video outputs (which work only when using a CPU with an integrated GPU) consist of an HDMI port and DVI-D port. Audio connectivity is handled by a set of three analog audio jacks.

Overall, this is a decent set of connectivity, although I would like to see a USB Type-C port even if it is running at USB 3.1 Gen1 (5 Gbps) speeds.