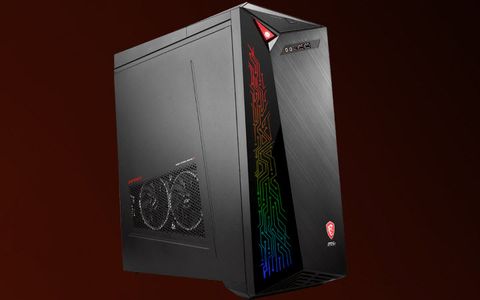 With its attractive looks, competitive price and strong performance, the MSI Infinite X is a good choice for most gamers.

MSI’s Infinite X features an edgy design with a tempered glass panel, a company-branded Z370 chipset motherboard and top-tier Nvidia graphics.  Our review model, the VR8RE-006US, features a liquid-cooled Intel Core i7-8700K, 16GB of DDR4-2400, a 512GB PCIe NVMe SSD, and a company branded GeForce GTX 1080 graphics card; an arsenal strong enough for an enthusiast gamer. At $1,899, the Infinite X VR8RE is a worthy consideration for gamers looking for a high-end PC that delivers excellent 1440p gaming performance at a reasonable price.

The MSI Infinite sports solid black aluminum side panels with edgy grooves that match the angular design. The solid left side panel has a large vent that lines up with the vertically oriented graphics card’s fans, giving the GPU an avenue for potentially excellent heat dissipation. The Infinite X also ships with a tempered glass panel if you want to show off your components, but airflow won’t be as copious with solid glass. However, there is a gap between the chassis and panel that lets some air enter the case.

The front panel features a brushed aluminum finish and a transparent window that showcases an integrated and patterned RGB LED light (it looks like circuit traces). A vent lines the right side of the front panel, letting air into the chamber via a 95mm case fan. The top edge hides a DVD-RW optical drive above the power button and I/O, which consists of two USB 3.1 Gen 1 (one Type-A, one Type-C) and a USB 2.0 port, in addition to headphone-out and mic-in audio jacks.  The top panel is angular, with a large vent and handle on the backside that makes moving the Infinite X infinitely easier.

The rear panel of the Infinite X offers significantly more USB connectivity, with four USB 3.1 Gen 1 (one Type-C, three Type-A) and two USB 2.0 ports, in addition to a gigabit Ethernet RJ45 port powered by an Intel i219V NIC, five audio jacks, and an S/PDIF interface. The motherboard I/O also includes two display outputs (an HDMI 2.0 and DisplayPort 1.4 interface), but you won’t need to connect those with the dedicated GPU, which sits vertically at the bottom right side of the rear panel and sports the usual GTX 1080 outputs (three DisplayPort 1.4 connects, an HDMI 2.0, and a DVI-D).

Removing the side panels exposes the primary components. An Asetek CPU liquid cooler’s radiator is mounted to the rear panel’s 120mm exhaust vent, but the radiator and matching non-LED fan are slightly smaller in size (95mm) and require an adapter for the case’s 120mm mount. The top RGB LED fan is of the standard 120mm variety, and the pump sports an MSI dragon emblem with a white LED light for some additional aesthetic flare. There’s also a 95mm fan feeding fresh air to the components mounted to the front of the chassis.

Under the cooler’s cold plate sits an Intel Core i7-8700K on top of a custom MSI Z370 ATX motherboard. The six-core processor isn’t overclocked out of the box, but MSI pre-installs one-click overclocking software that boosts the CPU to an all-core 4.4GHz (we’ll get into that more later).

The motherboard’s four DIMM slots are half occupied by a 16GB (2 x 8GB) kit of Kingston DDR4-2400. The memory itself lacks heatsinks and is slightly slower than the usual DDR-2666 we usually see accompanying Core i7-8700K-equipped PCs (it’s the standard memory speed for the CPU’s controller), but MSI provides an acceptable starting point for gamers (who generally don’t rely on memory speeds so long as it’s of adequate capacity) and a reasonable upgrade path for those seeking faster or higher-capacity RAM down the line.

For storage, the MSI Infinite X VR8RE comes equipped with a 512GB Intel 600p PCIe 3.0 x 4 NVMe SSD. The lack of an additional storage volume is disheartening, and gamers with extensive libraries will likely want to invest in a HDD. Fortunately, there are three  empty 3.5” drive bays and a 2.5” drive mount behind the right-side panel for any storage upgrades you’d want to add down the line.

The vertically mounted graphics card is a retail model - an MSI GeForce GTX 1080 Armor 8G OC that should provide excellent 1080p and 1440p gaming performance, and the unbranded 550W 80-Plus Bronze certified PSU is more than adequate to power the components.

However, the cable management is mediocre, with fan cables from the radiator fan, pump, and vertically mounted M.2 WiFi module (an Intel Wireless-AC 3168) strewn across the motherboard with seemingly no effort to hide them or run them inconspicuously. A clip holding a bunch of wires at the top of the chassis came loose during shipping, but the adhesive wasn’t strong enough to stay attached for long when we tried to remedy this (we know this happens sometimes, but it’s normally easy to fix).

MSI pre-loaded a handful of company branded software utilities in the Infinite X, including Command Center (for CPU overclocking and monitoring), Gaming App (to adjust monitor color modes and more) Dragon Eye (an overlay program), and Mystic Light (RGB LED controller). The company also loaded it up with SteelSeries Engine, which has been pre-configured for MSI’s RGB LED-illuminated MPG27C gaming monitor (not included).

The Infinite X also comes with an Interceptor DS4200 gaming keyboard and an Interceptor B1 gaming mouse. The keyboard features a 20-key anti-ghosting capability with membrane switches, multimedia function hotkeys, and multi-color LED backlighting. The lights are controlled onboard without software, with three illumination modes (Off, Steady, Breathing), four levels of brightness, and ten adjustable flash speeds. The mouse is also geared for gaming with onboard LEDs and a plethora of additional buttons.

Next Page Synthetic, Productivity, and Gaming Benchmarks
2 Comments Comment from the forums
Be In the Know