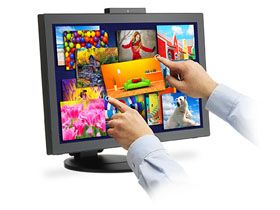 The E232WMT ships in NEC’s usual solid and well-protected packaging. The stand and base are already attached, so no assembly is required. The power supply is internal and serviced with an included IEC cord. Additional cables include VGA, single-link DVI, USB 3.0, and analog audio. The only interface missing is HDMI. You also get a quick setup guide. The full user manual can be downloaded from NEC’s website.

We were initially surprised at the absence of a driver disc. But it turns out that all you need to do is connect the USB cable to a machine running Windows 7 or 8, enabling the touchscreen, camera, and microphone! The E232WMT is truly plug-and-play.

The touch layer is glass of course, with a 7H-rated coating that's harder and more resistant to abrasion than the glass itself. It doesn’t quite have the slickness of the oleophobic coatings found on many handheld devices, but resists fingerprints well. Not surprisingly, it has no anti-glare properties. The image can be made bright enough to combat fairly harsh reflections. However, you should give some consideration to placement. The glass is superb optically and does not affect image clarity at all. If you look closely, you can see the gap between the touch layer and the LCD.

The one-inch bezel is completely flush and unbroken by logos, lights, or buttons. The bulge at the top contains the camera and a stereo microphone.

The camera and microphone are enabled automatically when the monitor is connected via USB. You get 2 MP resolution (1920x1080) at a maximum of 30 FPS. Even though the E232WMT supports USB 3.0, camera functionality still works attached to a USB 2.0 port on your computer. The stereo microphone has its own analog-to-digital converter, and captures the voice well when you’re seated at a normal two- to three-foot distance. I tried out a few Skype calls and had no issues with either audio or video.

The E232WMT’s controls are hidden around the lower-right side of the panel. You'll have to operate them by feel. They are labeled, but the text is molded into the plastic and hard to read. Luckily, pressing any key pops up on-screen icons that tell you the different functions. The OSD is pretty simple though, so you won’t need to tweak the display much once you get it set up.

The coolest thing about the E232WMT is its stand, which works in an accordion fashion to provide normal tilt function, plus the ability to lie at any angle between full vertical and full horizontal. The stand sports high-end build quality and the panel doesn't budge once positioned. There is no slop either; it feels like a single piece of hardware rather than a collection of parts.

In its flat position, the panel sits about 4.75 inches off the desktop, a perfect height for interaction on a typical table. If you want to use a virtual keyboard, just tilt the back up a little and your elbows are at an ideal 90-degree angle (if you’re of average height).

If you’re wondering about portrait mode, you can use the E232WMT in a vertical position by removing and re-attaching the stand with its four screws. The mount is a standard 100 mm VESA, and you can flip the image in Windows. Users editing a lot of documents might consider making the change.

Used as a traditional monitor, the E232WMT sits at the correct height and angle for comfortable viewing. Considering the extra touch layer, it’s a tribute to NEC’s engineering that this display is no thicker than a traditional panel. Two of the USB 3.0 ports are on the left side of the power bulge, inset from the edge by about 1.5 inches.

Speakers are mounted at the top of the bulge and fire upwards. With only one watt of power apiece, they sound fairly anemic. You’ll hear only the upper-mid-range frequencies. Even at maximum volume, they’re pretty soft-spoken.

You get one of every relevant video input, except for DisplayPort. The HDMI connector accepts an audio stream, or you can pipe sound in through the 3.5 mm analog stereo jack. You can also see the headphone output and remaining USB 3.0 ports. Of course, to enable touchscreen, camera, and microphone functionality, you must connect the upstream port to your computer.