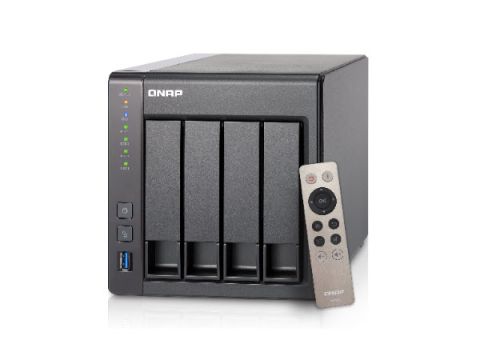 The TS-451+ ships in a brown box with a small list of specifications, features and capabilities printed on it. Most of these systems are sold online, so there's no real need for flashy packaging. I did recently visit a retail store and discovered NAS products from other companies on shelves in the same labeled brown box. They were easy to spot because there were so many, and they all had a layer of dust on top.

After reviewers started talking about how NAS appliances are packaged, the major players began using dense foam with extra protection in the corners. QNAP has always packaged its products well, and its TS-451+ maintains the status quo. The accessory package is even boxed separately, so your NAS won't get scratched in transit.

Inside the box, we find a quick-start guide and QNAP's 13-button remote control. This is the third QNAP product we've reviewed with this remote, and I was finally able to configure a system with QTS 4.2 and Kodi to use it. The remote is responsive, but lacks strong tactile feedback. Since it uses IR, you can easily clone the signals to a programmable remote from your home theater.

If you are a fan of QNAP's two-line display, you'll be disappointed to find it isn't used on this model. I often use the read-out for initial setup. Without it, you'll have to rely on QNAP's Finder Utility to retrieve an IP address and get everything configured.

The original TS-451 had a dual-core Celeron processor and shipped in a white case with this same design. Somewhere around that time, QNAP started using more plastic in its construction, which tends to run warmer than metal enclosures. Given the low-power SoCs we see nowadays, though, heat is rarely a problem.

A power button and one-touch copy button (tied to the forward-facing USB 3.0 port) are located on the far left side of the chassis' face.

The system has seven status LEDs that indicate power, network, USB and hard drive activity. Aside from them, the rest of the front is fairly sparse. QNAP's drive sleds do not lock, so you won't want to use the system anywhere security is a concern.

The drive sleds employ a newer design than many of the QNAP appliances I've tested in the past. In the image above, you can see that air must pass through a small hole that won't dissipate heat evenly. This could negatively affect drive temperatures, leading to louder operation if you end up choosing hotter-running disks. Manufactures are not afraid to ship six- and even eight-platter drives these days, and some of them get really hot. Fortunately, using our lab's 5900 RPM Seagate NAS disks, we didn't have any problems with noise.

One side of the system has a vent to keep the platform cool. Four rubber feet on the bottom of the enclosure minimize vibration to and from the NAS. Like the rest of the TS-451+ chassis, the rubber feet are low-cost parts. Many of QNAP's upper-range systems are built to a higher standard.

A large fan on the back of the TS-451+ is automatically adjusted to keep the system and drives cool. Without an internal power supply, a smaller fan isn't required to cool that component. Again, there are three USB ports back there, one of which supports third-gen transfer rates. Two GbE ports move data to and from the system.

The less common bit of I/O is a lone HDMI output. Over the last two years, we've increasingly seen HDMI show up in networked storage. It started appearing on high-end systems as Intel pushed integrated HD Graphics. Now the functionality is available down in the company's least-expensive models.